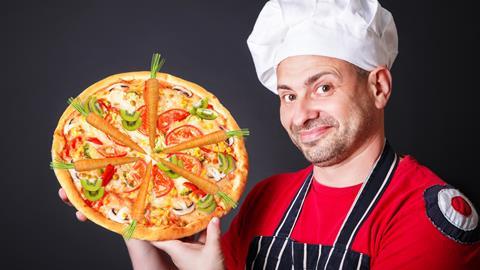 The next margherita? Pizza category report 2020

The creation of a kiwifruit pizza may have caused outrage, but it’s on trend. Because consumers are lapping up healthier, vegan fare

“This makes me unreasonably angry,” wrote one Reddit user. Another could not believe there were “freaks out there who would even do this”. Do what? Put black plastic in the recycling bin? Get a George Eustice tattoo? No. Put kiwifruit on a pizza. That’s what Swedish man Stellan Johansson did last month, sparking outrage on social media.

But as internet trolls attacked Johansson’s fruity creation, suppliers may have quietly applauded it. Because it’s just the sort of eye-catching, meat-free innovation behind pizza’s current success in grocery.

The market has added a sizzling 4.2% in take-home value sales to be worth £1,065.3m [Kantar 52 w/e 31 December 2019]. That’s thanks to a 6.3% rise in volume sales across frozen and chilled. “This is driven predominantly by shoppers becoming more engaged with the category, buying more often and with bigger baskets,” says Kantar analyst Amber Trott.

A big reason for this renewed excitement is the recent flurry of vegetarian and vegan NPD. Arguably, it began in October 2018, when Dr Oetker Ristorante teamed up with Quorn for Pesto and Royale pizzas. They were followed, in no particular order, by meatless offers from the likes of Linda McCartney’s, Goodfella’s, Marks & Spencer and Iceland.

All have been greeted with enthusiasm from shoppers following the veganism super-trend. And the pace at which people are snapping them up “shows no sign of let-up at all” according to Paula Wyatt, head of marketing for pizza at Dr Oetker, maker of the frozen Chicago Town and Dr Oetker Ristorante brands. Plant-based pizza is seeing double-digit growth, she says.

The relatively broad appeal is a major factor in this success. While a survey of 1,694 Brits for The Grocer by marketing research provider Streetbees found only 3% identified as vegan, 35% of respondents had tried vegan pizza. And 76% of those who hadn’t said they’d be happy to do so.

“There are more and more non-vegan consumers coming in saying ‘we want to meat-reduce; we want to take part in what’s happening here’. It’s just going to keep marching on,” Wyatt adds.

The appeal isn’t just about reducing meat, either. Plant-based pizzas are also widely perceived as better for you. Indeed, a fifth (21%) of Streetbees respondents who had tried plant-based pizza believed it was healthier than the regular stuff.

Wellbeing is definitely an influence in this area of the market, notes Claire Hoyle, head of marketing at Goodfella’s, which made its plant-based pizza debut in April 2018 with the cheese-free Vegan Stone Baked Falafel. “The nutritionals are actually very good,” she says. “It’s one of the healthiest pizzas in our entire range.”

Still, that’s not always the case. Goodfella’s debut was followed last spring by Vegan Stone Baked Spicy Vegetable Salsa. Topped with cheddar-style vegan cheese, it has a very different selling point to its predecessor: indulgence. “Vegans are looking for an answer to junk food - and historically it hasn’t really existed. So, vegan pizza has been able to provide the answer,” says Hoyle.

That’s as long as the cheese is just right. Before Goodfella’s unveiled Spicy Vegetable Salsa, it experimented with “a huge amount of vegan cheeses; you wouldn’t believe how many” she adds. “One challenge was to get that pizza stringiness - and the other was texture. A lot of vegan cheeses stick to the roof of your mouth.”

Such attention to detail is surely essential given Brits’ high regard for cheese: 65% agree it’s the best part of a pizza, according to Streetbees.

The good news for plant-based suppliers is that the standard of cheese alternatives has recently “improved dramatically, especially the texture and meltability of it” says Mike Hill, co-founder of vegan frozen brand One Planet Pizza. It uses what it calls “cheeze” - a coconut-based product created in collaboration with Heather Mills’ VBites. “We know that our melty, stretchy pizza cheeze has played a major role in our success,” Hill adds.

Plant-based may still be a small segment of the pizza category, but indulgent options - such as Chicago Town’s Sticky BBQ Jackfruit (see below) - will help the trend “tip over into the mainstream” predicts Wyatt.

Hill foresees similar success. “Considering that the UK frozen pizza market is worth over £470m and is growing steadily, the potential for vegan pizza to get even 1% or 2% of this is huge - especially when you consider that latest research suggests 22% of the population is either vegan, vegetarian or actively reducing their meat/dairy intake.”

So, what are traditional pizzas doing to stave off the plant-based invasion? Not much, reckons Hoyle. “It’s not necessarily that the rest of the category has to fight back.” Vegan pizzas are bringing in incremental sales to the category, rather than cannibalising classic toppings like pepperoni, she says. “It’s a brilliant story for us, for the retailers, and for consumers because it gives them options they didn’t have previously.”

Wyatt is similarly nonplussed about the ‘threat’ of plant-based. “There’s no need to fight. There are all sorts of pizza lovers. And this is a way we can bring more people into the category.” Besides, there will always be a large segment of shoppers who return to classic toppings, she says. “We’ve seen, over the years, no matter what innovation we bring in, 70% to 80% of the category is in cheese and pepperoni.”

And there are far bigger schisms in pizza than traditional versus trendy toppings. Take the battle of the bases. Thin & crispy and stone-baked options have added £81.1m between them across chilled and frozen [Kantar]. Deep pan and french bread, on the other hand, have shed a total of £13.1m.

That decline is an “age-old” story, says Wyatt. The fall of traditional deep crust “has been going on for so long”, she says. “I’m sure deep is just seen as a slightly old-fashioned part of the category and just isn’t moving on.” When deep crust pizzas get more experimental, they can still bring in the punters, she stresses - pointing to the success of Chicago Town’s Takeaway range with a stuffed crust. “That’s not thin, and it’s growing at 13% year on year,” she says.

The Chicago Town range has another advantage, too: it falls into the frozen category. Because deep pan volumes are more or less holding their own in their frozen heartland - down just 0.1%. This suggests the segment still has plenty of loyal fans, Wyatt believes. “I just think a lot of consumers are trading down, buying private label. There’s no real added value in the sector.”

Indeed, the average price of frozen deep pan pizza has fallen by 4.1% over the past year [Kantar], which is dragging down value.

Conversely, prices of thin-style crusts are up across the board - by as much as 16.1% in the case of the burgeoning frozen stone-baked segment. The pros of slender bases are many, says Goodfella’s Hoyle. “They have different types, lots of flavours, and a number of brands operating in the sector. So, the consumer choice is much greater. The space on fixture is much more generous - and shoppers definitely have that perception that deep pizzas are worse for you.” This assumption about health has led to “more female shoppers buying thin pizzas than deep pan”.

The deep pan situation highlights another schism in pizza: chilled versus frozen. Chilled value sales are up a respectable 2.2%. But it’s frozen where the greatest opportunity lies for suppliers and retailers. The sector’s value is up 6.5% in comparison. In the case of brands, the difference is far more pronounced - chilled is flat while frozen has gained 5.8%.

Branded investment is a key reason behind the differences in fortune, says Wyatt. “In frozen pizza, 60% of sales come from brands, but it’s only 20% in chilled.” And with a highly branded sector “comes all the investments they make”. Indeed, last year pizza brands spent £9m on marketing in frozen, while chilled was under £1m, she adds.

That big spend in frozen aimed to capitalise on shoppers’ revived trust in the category, suggests One Planet’s Hill. “The image and quality of frozen goods has improved over the last decade, and education of consumers in the health advantages of quickly frozen food over chilled/ambient, in terms of losing its freshness and nutritional value, has started to impact on the market.”

So it’s convenient. And let’s not forget that it’s also cheaper. An average frozen pizza costs £1.46 per pack - 71p less than the chilled average [Kantar]. “Because frozen pizza can be produced in bulk, these savings are also passed on,” Dhaliwal adds.

“Customers are realising the significant benefits of frozen pizza versus chilled”

Still, don’t give up on the chillers just yet. While budget-conscious shoppers are snapping up frozen pizza at blazing speed - unit sales are up 8.1% - chilled is still the bigger market in absolute terms [Kantar]. It’s worth £570.6m, which is £75.9m more than frozen.

One of chilled’s main advantages is its position in the shopper journey, Hoyle points out. “Nine times out of 10, the chilled aisle is reached sooner than the frozen aisle.” Plus, chilled packs are able to use windows “to show the pizza off”.

So, the opposite of kiwi pizza, basically. 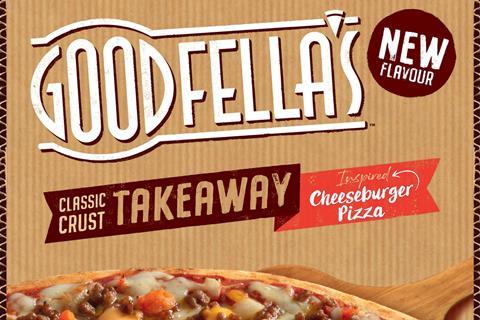 Goodfella’s Takeaway Classic Crust Cheeseburger | Launch date: March 2020 | Manufacturer: Nomad Foods | The latest frozen innovation from Goodfella’s is two US classics in one. It’s a New York-style pizza comprising a stone-baked base topped with tomato sauce, mozzarella, minced beef, tomato, onion and burger sauce (rsp: £3.50/554g). “It really delivers on that cheesy beefburger taste” Goodfella’s claims. The brand wants its NPD to simulate “the experience shoppers would get from delivery or restaurant-style pizza – and that means bringing exciting new flavours seen elsewhere in the market”. 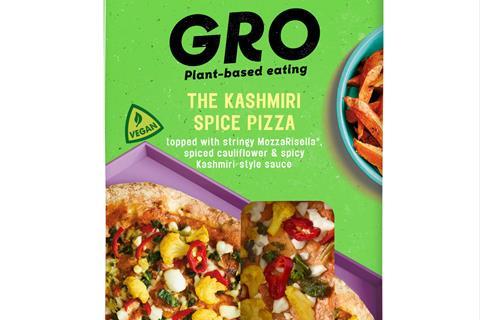 Gro The Kashmiri Spice | Launch date: January 2020 | Manufacturer: Co-op | Here’s a spicy SKU from Co-op’s new plant-based Gro brand, made up of more than 35 items. This single-serve pizza (rsp: £3.50/250g) has a stone-baked base, topped with Kashmiri-style sauce, spiced cauliflower florets, spinach and red chilli slices, finished with vegan cheese. It brings “both colour and excitement to shelf” says Co-op. 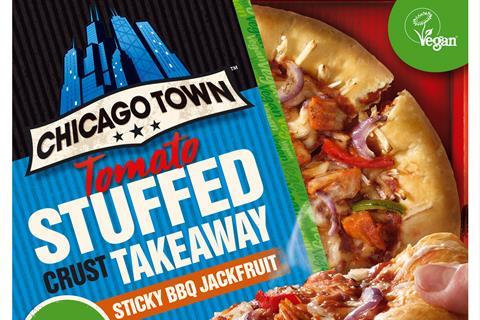 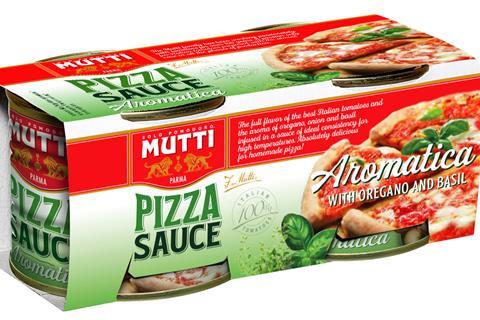 Mutti Pizza Sauce | Launch date: August 2019 | Manufacturer: Mutti | This may be a little old, but it’s worthy of note. Italy’s biggest tomato brand, Mutti, tapped the homemade pizza trend last summer with this two-pack of 210g cans. It’s the same sauce that launched in 2018 in a 400g can. The new format (rsp: £2) came “in response to shopper feedback that some were looking for a smaller pack size” says Mutti.