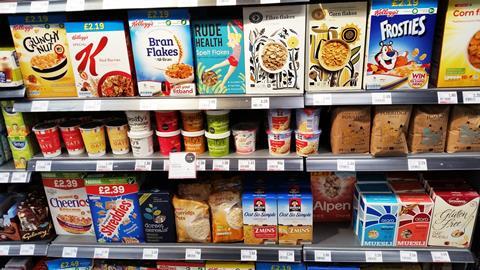 The proportion of children’s cereals with high sugar content has fallen by 12 percentage points in a year, as retailers and suppliers respond to the obesity crisis, according to a new report by the Food Foundation.

However, despite some positive achievements, the Broken Plate report claimed there was still a “shocking” level of inequality in the affordability of healthy food in the UK. There was an alarming rise in the number of fast food outlets, particularly in areas with the highest levels of deprivation, it said.

The Food Foundation, which was published in conjunction with footballer Marcus Rashford’s campaign to help poor children get a healthier and more affordable diet, said its findings showed an urgent need for government intervention to fix the UK’s broken system.

But the report revealed progress by the industry in some key areas.

The proportion of children’s cereals with high sugar content decreased from 49% to 37%  from 2019 to 2020. Research by Action on Sugar and Action on Salt conducted across nine major supermarkets called it “an encouraging improvement”.

The data was also collected before the voluntary removal of cartoon characters from children’s cereals by Asda, Aldi and Lidl.

However, it highlighted that often plant-based ready meals were more expensive than meat, fish or dairy alternatives.

Broken Plate claimed there had been a continuing divergence between the cost of healthy and unhealthy foods, with the average cost of more healthy foods in 2019 being £7.68 (per 1,000 kilocalories) compared with £2.48 for less healthy food.

It concluded the 20% of households with the lowest levels of disposable income would have to spend 39% of their disposable income in order to eat a healthy diet, as defined by government’s recommended Eatwell Guide.

“This demonstrates a failing system where the poorest simply cannot afford to feed their families a balanced and nutritious diet,” said the report, which comes as part of Rashford’s campaign and formation of a Child Food Poverty Task Force, calling on the government to implement the recommendations in the recently published National Food Strategy that support vulnerable children.

Today’s report also found fast food outlets accounted for a quarter of all food shops in English local authorities in 2019, with one in six councils experiencing an increase of more than 5% in the proportion of fast food shops in 2019.

Blackburn with Darwen had the highest percentage (39%) of outlets that were fast food takeaways.

“Covid has exposed the devastating consequences of diet-related disease, showing that efforts to shift our food system in favour of healthy eating have been too little, too late,” said Anna Taylor, executive director of the Food Foundation.

“Leaving citizens to swim against the tide of a system which favours unhealthy eating is no longer an option,” she added. “Change is possible, and we have seen improvements in three of our 10 metrics, but it requires government and businesses to act much faster.”

Zoe Davies, a nutritionist from Action on Salt, added: “Whilst it is encouraging to see that the proportion of unhealthy breakfast cereals marketed to children are decreasing – rather worryingly, the average nutrient content of these cereals hasn’t actually changed very much. In fact, many of these products still contain unnecessary amounts of sugar and salt and are low in fibre – not quite the nutritious kick-start to the day our children need.”

“The government’s new obesity strategy must play a pivotal role in rebuilding the nation’s health by encouraging all food and drink companies to manufacture and promote healthier options, especially to children.”