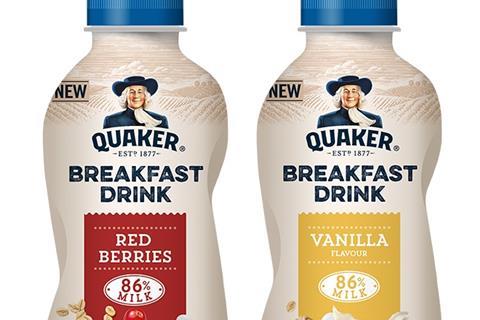 PepsiCo has axed its Quaker Oats range of drinks after less than a year in the face of disappointing sales and a waning breakfast drinks market.

The porridge brand unveiled its Breakfast Drink in July 2018 to challenge the dominance of Weetabix On The Go drinks. Two variants, Vanilla and Red Berries, were made with wholegrain oats and 86% milk.

However, PepsiCo took the decision earlier this year to “delist our Quaker Breakfast Drink offering due to market performance and the declining breakfast drinks segment” said a spokeswoman for the supplier, adding that the market had plunged 10.7% in value over the past year.

The Quaker drinks are now no longer available through the UK’s major mults, discounters or Ocado, having most recently vanished from Morrisons shelves in early June.

However, the brand expected to recoup sales though “the growing on-the-go breakfast market” said the spokeswoman. “We are currently experiencing strong growth on our Porridge To Go Squares, which were the second-biggest contributor to the total cereals category growth in 2018, and this is our focus.”