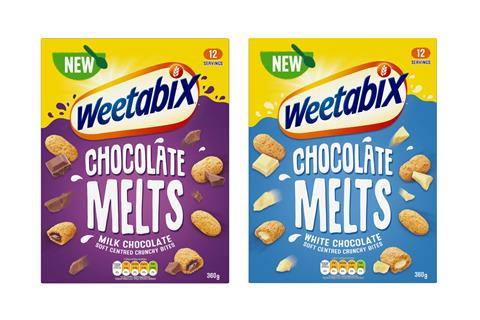 The cereal will launch in two flavours: Milk Chocolate and White Chocolate

The cereal is claimed to be high in fibre, low in salt and is fortified with vitamins and iron, making it “a great way to start the day or enjoy as a snack”, said Weetabix.

It is also classified as non-HFSS and has no red traffic lights for its nutrition.

Weetabix Food Company head of brand Gareth Turner said Weetabix Melts would appeal to shoppers looking for a more indulgent breakfast or snack option, “with the added reassurance of health and quality that consumers know and expect from the Weetabix brand”.

The launch will be supported by a £2.5m investment over the next year, including a TV ad in the summer as well as social media campaigns and shopper activation.