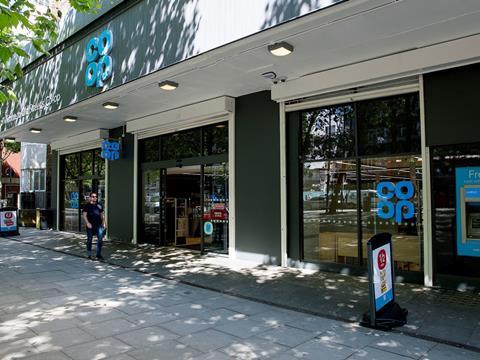 The new blue card has been dispatched to more than five million active members and the retailer wants to recruit a million more as the scheme progresses.

From today Co-op membership will entitle them to 5% back on every own-brand Co-op product or service they buy and 1% extra for a local good cause.

People who have not received their new bright blue card will still be able to start receiving the rewards on their old cards, the retailer said.

In addition, the Co-op has announced it will give money raised from the sales of its Co-op bags for life and the money collected from the 5p carrier bag levy to good causes chosen in the locations where it trades.

“That means every one of the 4,000-plus local causes will receive something straight away,” group CEO Richard Pennycook said in a blog last week. “In most areas this will be more than £100 but in some areas this instant community benefit could be much higher.”

Pennycook described today as “a huge moment in our three-year Rebuild”.

“The 5% for you and 1% for your community rewards are the biggest changes we’ve made to Co-op membership in decades,” said Pennycook.

During the trial period this summer when Co-op colleagues were testing the new scheme, they raised almost £74,000 for their communities.

“Soon our millions of members will get the same opportunity to do good by choosing Co-op,” Pennycook said.

He emphasised the support for local communities through the new membership was different to any other national business as it had no cap.

“The more members spend on our Co-op products and services the more we can give to local communities,” he said. “Other businesses typically set a marketing budget for their community support. But that’s far from our approach. We’re making communities central to all we do because that’s always been at the heart of the Co-op way of doing business.”

“I genuinely think we might have the ingredients for alchemy here - a compelling membership scheme that everyone can easily understand, and that puts worthwhile rewards into the hands of our members.”

Crofts added he had been spending and buying more while trialling the card alongside the Co-op’s 70,000 colleagues during the summer.

“If this is replicated more widely when the scheme goes live from 21 September the results could be quite dramatic,” he said.

The membership proposition was announced at the Co-op agm in May alongside its renaming as the Co-op instead of The Co-operative and its store rebranding with the retro logo and a dark grey fascia.

It estimated then that the 5:1 membership would see it hand back £100m a year to its members and communities by 2018.

The rewards would be in addition to the profit share - known in the past as the divi - which it expected to start paying again once the three-year ‘Rebuild’ phase was complete.

The group’s targets also included recruiting one million new members and driving up sales across the business to 50% by members (currently 25% in the food business) while returning an additional £3m in benefits to Fairtrade producer communities by increasing its sourcing commitments.