What twisted mind came up with the idea of chilling bread? I first came across this perverse habit in the 1980s in the US, where I was amazed to find that Americans stored loaves in the fridge.

Apart from the storage issue - few Britons have fridges of US dimensions - I just couldn’t see why. The whole point about bread is that it should be freshly baked with a contrast between crumb and crust, or if it’s a ‘keeper’ (made from sourdough, say), still rewarding to eat, or toasted. Refrigeration ruins bread. 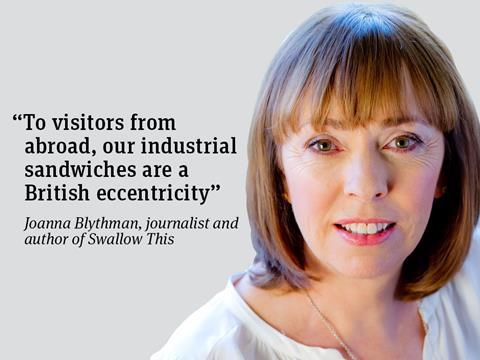 This is one reason - the others include factory-farmed fillings, additive and enzyme-tweaked technopap - why I never eat those cold, damp, sagging triangles.

Pay £2.50 upwards for that miserable insult to gastronomy? You must be joking. One up from pot noodles as far as I’m concerned.

The appeal of Subway’s sandwiches has long been lost on me, too. These outlets smell so strongly that I cross the road to avoid them, but I suppose people like the fact that their rolls, whatever their deficiencies, aren’t clammy and cold to boot.

I can’t believe the Earl of Sandwich ever intended his namesake to be frigid. Instead I blame the industrial debasement of bread, factory line fabrication, and the modern food safety establishment, which confuses refrigeration with true freshness and hygiene.

To visitors from abroad our industrial sandwiches are a British eccentricity. We can do better. People queue to taste the celebrated Borough Market toastie, made with artisan cheese and sourdough, just as Parisian bars draw in custom for their rough-hewn sandwiches made with the revered pain Poilâne. But surely it’s time to start developing the zone between the drab industrial sandwich and the classy, boutique top end?

It’s not a question of ever more desperate spins on the same rubbish fillings and breads, but rethinking how we make and sell everything that bears the name. In the 1980s I worked in an independent sandwich bar. The products of our labour never saw the fridge: they were made, sold, and eaten within hours. In a nation that increasingly cold-shoulders chilly, humid pap, the traditional sandwich bar is surely ripe for a comeback.