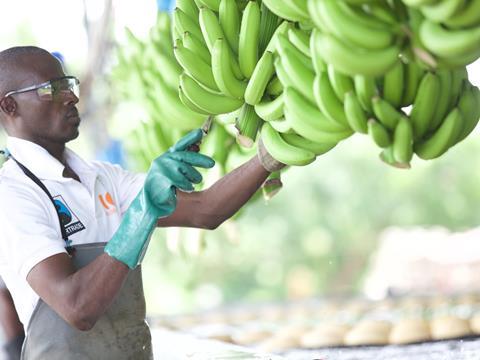 Banana wholesale prices are up almost 20% year on year, after poor weather in Central and South America disrupted production.

Prices are up 18.7% year on year to an average of £837/tonne due to flooding in key growing regions, according to Mintec.

“Supplies have been delayed from Ecuador, Columbia and Peru due to flooding,” says Mintec analyst Jara Zicha. “Heavy rains and flooding in these countries have impacted on quality and this has supported the prices.”

The weather situation in South America is unlikely to lead to a shortage of bananas in the UK, which imports the fruit from Costa Rica, Columbia, Panama, Ivory Coast, Ghana and Ecuador.

“What’s important is that you’ve got a balance of options should there be any bad weather in any of the particular countries,” says Zicha.

However, it is putting upward pressure on global banana prices at a time when costs for the fruit are already rising in the UK due to currency fluctuations following the Brexit vote. “The pound versus the dollar is more expensive, so shipping costs are up, which is having a knock-on effect on the cost of the product,” says Andy Weir, marketing director at wholesaler Reynolds.

Supermarkets hiked the price of a kilo of bananas last year after commodity prices surged on the weakened pound, marking the first price rises on the SKU - a key battleground in retail price wars - since 2014.

Tesco, Waitrose, Asda and Sainsbury’s all increased their prices from 68p to 72p in November and December, following similar moves by Aldi and Lidl. Waitrose subsequently increased the price of a kilo of bananas to 75p in March.

Import prices to the UK increased to an average of £810/tonne by the end of March [Mintec 52 w/e 21 March 2017] and prices have continued to rise month on month.