Christmas salmon set to be pricier this year 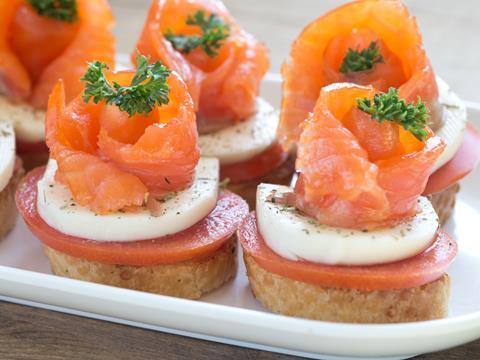 Shoppers might have to dig deeper into their pockets to put salmon on the table this Christmas, following a challenging year for producers.

Prices for Norwegian salmon hit £6.24 per kg last month, up by 28% since September and more than double the price it stood at four years ago.

Norway’s salmon harvest volumes have dwindled in 2016, due to sea lice outbreaks. This was most prevalent over the summer months, and prices reached their highest level in over 10 years in July.

Prices for the commodity fell sharply between August and the start of September as sea lice numbers were brought under control and harvests increased 5% year on year in September to 118,000 tonnes.

But they have risen again in recent months because poor Norwegian salmon growth rates earlier in the year limited supplies of larger 6+kg salmon, which is typically the most sought after by UK consumer.

To complicate things further, Chile - another major salmon producer and exporter - suffered a severe harmful algal bloom outbreak in February and its farmed salmon production is now forecast down 9% year on year to 294,000 tonnes.

This has caused the US, Chile’s main export destination, to turn towards Norway to fill its salmon demand deficit with Norwegian fresh and frozen fillets, increasing imports by 44% year on year to 2,900 tonnes in September alone. Demand for Norwegian salmon is also rising in higher-end markets in Asia and Africa, putting further pressure on supplies.

UK salmon consumption typically peaks at Christmas, and the UK increased Norwegian imports by 24% year on year to 6,500 tonnes in September, more than any other country in Europe.