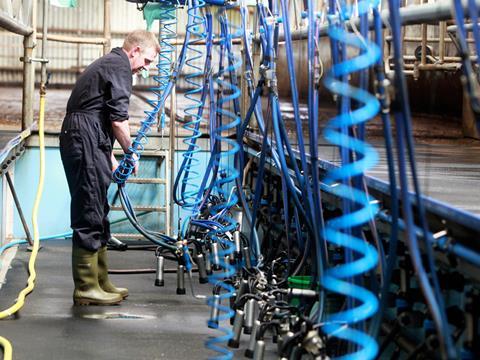 UK milk production continued falling last month, with tightening supplies sparking a raft of farmgate price increases by processors after a long period of depression in the sector.

Daily milk deliveries for this period were also down year on year at an average of 1.8m litres, which is 4.3% lower than AHDB Dairy’s three-year average.

The continued pull-back on production followed a fall of 4% in milk volumes during the crucial spring flush and, along with a host of price increases, is a further sign dairy prices have started to turn the corner, says NFU dairy board chairman Michael Oakes, who also notes wholesale cream prices were up 28% between May and June.

First Milk was the latest major processor to increase its farmgate price last week after it announced it was hiking its A price by 0.5ppl for July and its B price - based on dairy commodity markets - by 2ppl.

Tesco has also halted a series of price cuts by increasing the price it pays members of the Tesco Sustainable Dairy Group by 0.02ppl for the three months from 1 August, while Müller held its standard milk price at 19.11ppl, and is currently paying up to 3ppl extra in retailer supplements to some farmers.

But despite a number of increases, prices remain far below sustainable levels, warns Oakes. “We need to ensure extra money is passed back to farm as quickly as possible.”

“On liquid milk we need to make sure processors aren’t hiding behind retail premiums. Retailers have stuck by their word with minimum pricing on liquid milk, and in some cases on cheese, but these should not be used to hide real dairy market improvements.”