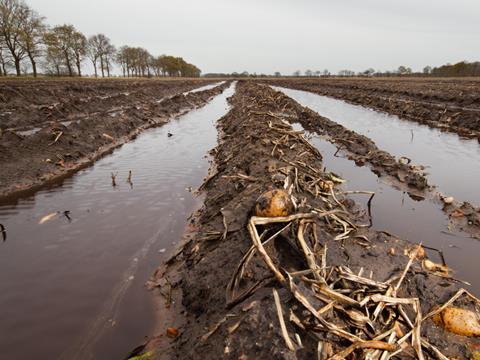 Growers in the UK are still struggling to catch up with the planting season after one of the worst starts to the year in living memory.

Many farmers failed to plant their planned areas of winter crops last year due to the poor weather and with spring only just arriving in recent weeks, growers are now having to be realistic about lower yields on a host of crops.

“Spring sowing is well behind in most parts of Scotland and up to three weeks in our area,” says Perthshire-based chair of NFU Scotland’s combinable crops committee Ian Sands.

“There are still fields to plough that have been too wet after potatoes,” he adds. “The seed drills started again last week, in far from ideal conditions, but time is moving on. It is now late enough to know there will be an impact on spring barley yields and farms with heavy clay land will still have a long wait for it to be dry enough..”

Elsewhere, Southern England Farms in Cornwall this week warned of delays in the planting of courgettes and cauliflower, while the drilling of crops including kale, cauliflower and some breeds of potato have been delayed by between four and five weeks, according to Midlands-based grower Worcester Produce.

While planting was on average three weeks behind schedule earlier this month, the picture could quickly change.

“This is part and parcel of fresh produce production in the UK, but we are already hearing that some growers are doing well,” he adds, with the damp conditions followed by warm weather promoting good crop growth.

“It’s too early to make a judgement on yields yet.”