The meat is Polish, the beer is Polish, the bread is Polish and the sausage is, you guessed it, Polish. “Everything in the store is from Poland,” says Delight Wedlinka office manager Justyna Cieniak. “Apart from the cream cakes. They’re made locally in London by a Polish woman, to a traditional Polish recipe.”

Since setting up shop in 2013, Polish cuisine specialist Delight Wedlinka is now firmly rooted with the Eastern European locals in Tooting. Food and drink is a beacon of cultural identity and grocery brands play a huge part in making immigrants feel connected to their homeland.

“If you use something every day, and then move here and you can’t get it, you don’t want to have to switch,” says Cieniak. “Of course, a lot of the companies are the same as in the UK but we like to buy our own brands because it’s traditional. Customers recognise and trust a brand and just want to be able to buy it here.”

The store has almost 30 members of staff, including four chefs on rotation from 8am until 10pm manning its most important categories: the meat and deli counters.

Every inch of the 15 ft-long deli counter is covered with Polish sausages of all varieties. So if you don’t know your kielbasa from your krakowska, tasting platters for customers run along the top.

“When I tried the white British sausages, it was horrible; I don’t know what’s inside there,” says Cieniak. “But what we offer is real meat in our sausages and you can taste all the seasonings inside.”

The occasional British shopper does come through the door, and Cieniak says sausage, bread and beer are good entry points to Polish grocery shopping for Brits.

“They have no idea how nice it is inside and they keep coming back to buy the bread and of course the sausages, because Polish sausage is the best. The deli section is very popular because it’s such good quality. If someone just tastes it once, they’ll come back. We also get a lot of Bulgarian and Russian customers, countries with similar cuisines to Poland, with a love of things like soup, meat and of course, vodka. We’ve got good Polish vodka!” 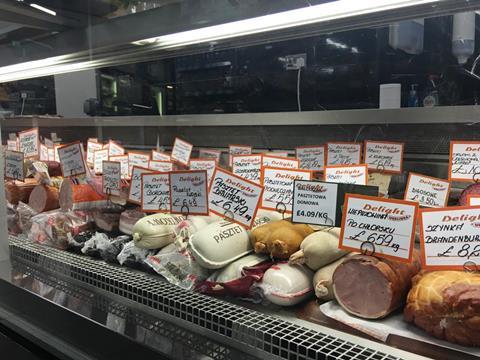 Cieniak is less gushing when it comes to the financial performance of the chain, declining to reveal any figures relating to sales or profits. However, the Delight Wedlinka portfolio is growing, with sites in Greenford, Neasden and Dunstable and a new store opening in Norbury later this year.

In terms of suppliers, Delight Wedlinka works with four in Poland, checking and comparing prices regularly against other wholesalers to get the best deals.

“We’re happy with our suppliers right now and we don’t change too much, but with Brexit we don’t know what will happen next month,” says Cieniak. “It’s a little scary. I’ve only been in London for three years and I can go back to Poland, it’s not a problem, but I came here because I wanted to develop and try something new. I want to be able to make the choice for myself and not to be told by the government.”

Though it’s too early to tell how the vote will affect Delight Wedlinka and how it operates, the referendum result leaves many businesses with a raft of unanswered questions about the future - and a lot of potential problems to be solved.

“With Brexit, I don’t know how it will look. What about prices? I don’t know what will happen,” says Cieniak. “It affects everything: interest rates, sales, everything.”

Luckily, Delight Wedlinka has escaped racist attacks spurred on by the referendum result, unlike less fortunate shopkeepers such as Norwich Eastern European food shop The Village Store, which was gutted by a petrol bomb this July.

“For the first few days our customers were very worried,” says Cieniak. “People were talking about what could happen, but everything has calmed down a bit now. I think people are hoping someone will come in and reverse it all. But it’s too early to tell how this will affect us. Anything could happen.”