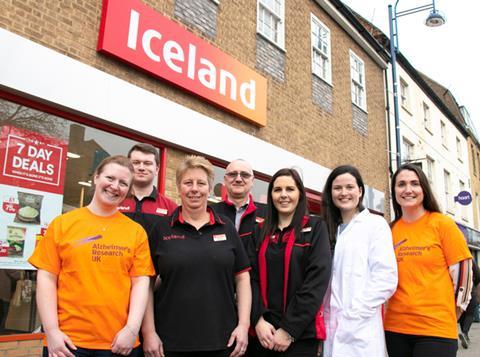 Iceland is to invest £1m in Alzheimer’s Research UK in a partnership with the charity for 2019.

The money will fund research searching for a cure as well as efforts to raise awareness of the debilitating disease.

Iceland is to hold a charity fundraising week from 8 June, with in-store activities involving both staff and customers.

The frozen food specialist supported Alzheimer’s Research UK previously between 2011 and 2013 and has raised £15m for dementia causes since 2010.

“Dementia has a devastating impact on our society and many of us will be personally affected by this incredibly cruel condition,” said Sir Malcolm Walker, Iceland’s founder and executive chairman.

“Today we have to deal with dementia knowing there is no cure and that must change. We desperately need more effective treatments to drastically improve the lives of people living with dementia and that’s why I’m so thrilled that we are supporting Alzheimer’s Research UK this year.

“Iceland Foods’ £1m commitment to the UK’s leading dementia research charity will hopefully lead us closer to the crucial scientific breakthroughs that will result in more treatments and ultimately a cure.

“I’m so proud of what Iceland Foods has already done to support dementia charities and I’m excited to be able to build on that by again supporting Alzheimer’s Research UK. With the backing of our colleagues and customers, we have the potential to make a huge difference.”

Hilary Evans, chief executive of Alzheimer’s Research UK, said: “We are absolutely delighted to be partnered with Iceland Foods Charitable Foundation once again. There are very few, if any, organisations that have shown as much passion and commitment to bringing an end to the heartbreak of dementia, as this one.

“With dementia now the leading cause of death in the UK, we must do everything we can to bring about life-changing treatments faster and partnering with forward-thinking companies such as Iceland Foods will help make these breakthroughs possible. We’re so excited for the year ahead, as this partnership will give us a fantastic platform to reach so many people, including staff, suppliers and customers, and engage with them about our vital cause.”