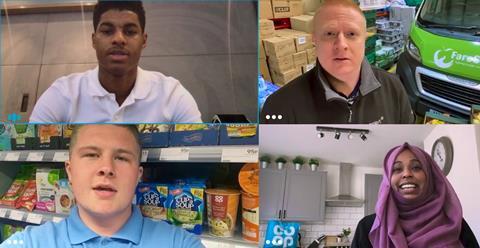 The U-turn followed a social media campaign led by footballer Marcus Rashford, who has also been working with FareShare and Co-op

MPs have demanded to know why the government snubbed retailers including Aldi, Lidl and the Co-op in the rollout of its controversial free school meal vouchers scheme.

Yesterday Prime Minister Boris Johnson made a major U-turn over the scheme, announcing it would be extended over the summer holidays in a £120m Covid summer food fund, following a social media campaign spearheaded by Manchester United footballer Marcus Rashford.

However, members of the Environment, Food and Rural Affairs (Efra) Select Committee, which is conducting an inquiry into the government’s handling of food supply during the Covid crisis, said other questions about the scheme, including the exclusion of the discounters and local c-stores, needed to be addressed by the government.

Last week The Grocer revealed how the Co-op and discounters Aldi and Lidl, as well as a raft of independent stores, were denied access to the scheme after the awarding of a £234m contract, without tender, to French provider Edenred.

Aldi was eventually accepted in a second wave of the plan, though not until almost the end of April

The Co-op also accused ministers of financially penalising parents who took part in its own alternative scheme, set up to fill gaps in the system.

“The Covid summer food fund is a welcome and necessary intervention,” said Efra committee chair Neil Parish, in the letter to parliamentary under-secretary at the Department for Education Vicky Ford.

“However, questions about how the voucher scheme works need to be rapidly resolved. Although initial teething problems with the scheme were understandable given the speed with which it was set up, retailers have raised very valid concerns about the shops that many families rely on being excluded from the scheme.

“It has now been months since schools first closed and many families will be relying on these vouchers to help feed their children over the summer. We hope that the government will address our concerns with the urgency required.”

Meanwhile, the Co-op announced yesterday it would continue to provide lunch for all 6,000 students who normally receive government-funded free school meals at its 25 Co-op Academies, throughout the summer holidays.

“We don’t think that’s fair on our students or their families who often struggle to keep food on the table, and it has an impact on the health and wellbeing of vulnerable families,” said Co-op Retail CEO Jo Whitfield.

A DfE spokeswoman said: “The award of the contract for the national voucher scheme was under the scope of public contract regulations allowing for urgent provision of services in response to the Covid-19 pandemic.”