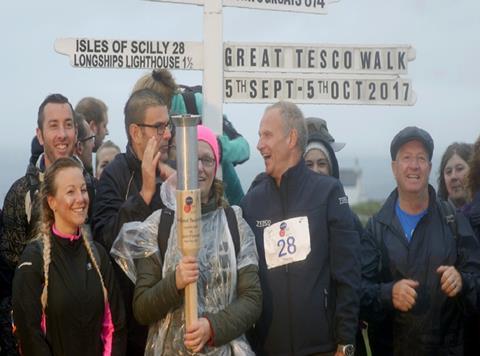 Thousands of Tesco staff are walking in relay the length of the UK, from Land’s End to John O’Groats, to raise funds and awareness for Diabetes UK and the British Heart Foundation.

The event, which began yesterday, will see colleagues from stores across the country walking in relay until 5 October, with the aim of adding to the £21m already raised since its partnership with the charities began in 2015.

The event includes Tesco colleagues from stores, offices and distribution centres, with the route broken down into 51 ‘legs’ of 5km, 10km, 25km and 50km.

Separate walks are due to take place in Wales and Northern Ireland. The route has been specifically designed to take in as many Tesco stores and distribution centres as possible and will pass around 150 stores along the way.

The main walk will also pass through Tesco’s head office in Welwyn Garden City, where walkers will be joined by Olympic gold medallist Greg Rutherford.

Dave Lewis, group CEO at Tesco said: “It’s incredibly important we do all us can to help our colleagues and customers live healthier lives. Our partnership with Diabetes UK and the British Heart Foundation has played a significant part in our efforts, helping to inspire more than 17 million people to get more active and eat better.

“I’m looking forward to joining colleagues to walk the first leg of the walk from Land’s End to our store in Penzance. It’s a great way to go the extra mile in our fundraising efforts for these brilliant causes.”

Rutherford added: “I’m really looking forward to cheering on Tesco colleagues when the Great Tesco Walk gets to Welwyn Garden City and I wish everyone taking part from Land’s End to John O’Groats the best of luck. It’s a big challenge and really shows the incredible commitment of Tesco colleagues to raise money and awareness for the important causes supported by the British Heart Foundation and Diabetes UK.”