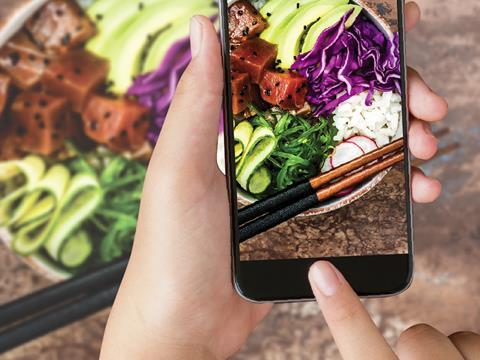 You would be forgiven for thinking Brits were superficial about food.

National media seized on the figure from the Waitrose Food & Drink Report 2016 showing one in five Brits has shared a food picture taken from their smartphone in the past month. And the food of the future will be highly Instagrammable too, they predicted, with Waitrose tipping photogenic Polynesian poke salad, watermelon juice and vegetable yoghurt as new trends.

But while Waitrose tells us food is now the “hottest social currency” it’s not all about appearances. The report also suggests the British have become more ethical about food. “Consumers are doing what’s intrinsically right,” says Natalie Mitchell, Waitrose’s head of brand development. “We’re living in an era when people are walking the walk, not just talking the talk.” So how are shoppers changing?

One of the main trends identified is “conscious consumption”. Today, 80% of us actively consider how and where our food is sourced when we shop. A quarter of us check the origin of our food before buying, while 20% actively consider animal welfare.

Reasons for this consciousness, the report says, include concerns about world resources, mistrust of institutions to take responsible decisions, and feeling “it’s the right thing to do”.

As a result, Waitrose says many of its 2,500 local and regionally sourced products regularly outsell the equivalent big brand in the same shop.

Claire Nuttall, founder of The Brand Incubator, is not surprised. There’s a growing sense of “community” among shoppers, she says. “People like to tell friends about the food they are serving, so having more of a genuine story around what’s on a plate reverts back to the whole trend about food being a great social talking point.”

Today’s ethical consumer is also taking an increasing interest in food waste. Three in 10 consumers say they care more about the environment and societyhahah than they did five years ago and, perhaps as a result, nearly half (46%) throw away less food and a third (34%) are freezing more.

It shows concerns are not just idle talk, but lead to action, says Sue Benson, MD of The Market Creative agency.

Retailers have had to adapt their offering. Wonky veg now features in Waitrose’s barometer of the top 10 food trends in 2016, and there are more single-serving sizes (and fewer multibuys) available to reduce waste. Accordingly, nearly half of those surveyed (45%) said they were shopping more often and buying less each time.

Nuttall says retailers and suppliers could do even more through collaboration. Ready meal providers could liaise with retailers’ fresh produce teams to use food that would otherwise have gone to waste. And the feelgood factor of reducing waste could also be promoted more. “Feelgood should come across on all levels of the food proposition, from source to sustainability,” she argues. “Preventing waste could be just one of the factors.”

She believes retailers will need to continually up their game and encourage consumers to make sound choices. “The good stuff needs to be showcased at real points in a shopper’s mission, not discovered in a dark corner.”