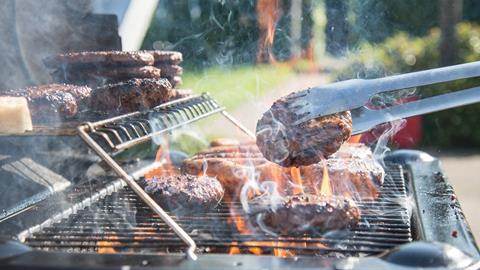 Typical of the British summer, National BBQ Week (5-18 July) has been something of a washout for most of the country.

But with a heatwave forecast for the end of July set to prompt a renewed surge in demand, we dug into the statistics for the trends behind Brits’ barbecuing habits

The UK has already seen one heatwave this year, with Europe recording its second warmest June on record. During those warm weeks in early June, UK searches for barbecue-ready food items rose by up to 488% compared with previous weeks, according to Google Trends research by Eat Great Meat.

This time around, the end of coronavirus-related restrictions are likely to coincide with the new spate of warmer weather, but also with surging Covid-19 infection rates as recorded cases climb back towards levels last seen at the height of the second wave in January.

With Covid-19 infections once again on the rise and a host of summer staple events cancelled or curtailed, health-conscious consumers could once again choose the safety of a back garden barbecue over going out.

Eat Great Meat’s Google Trends data suggests the pattern of meat indulgence could be set to continue in 2021, with a meat-heavy menu leading the way in terms of Google searches during June’s warm spell.

Beef and related items such as steak, brisket and burgers feature on the list of searched-for foods. Pork cuts also appear, with searches for bacon, sausage, pork belly and ribs rising between 28% and 400%.

As people made more of an occasion of getting the smoker out and with more spare time over summer, barbecues at the weekend when Brits might otherwise have been out and about became more common in 2020 despite a greater share of consumers being more likely to remain at home during the week.

The balance between weeknight and weekday barbecues began to even out, while they also became a social event for a few adults only, rather than the large family and friends gatherings of previous years.

Younger adults, in particular those under 35, have become more engaged in barbecues, meaning there are now more barbecues without kids present than with. As a result, those barbecues became boozier, with beer and lager appearing at the occasion more than twice as often as before, according to Kantar.

Locked-down Brits were more likely to indulge in a lunchtime barbecue in 2020, although they are still predominantly eaten later in the day.

In contrast with a host of trends in grocery, health considerations slipped to near the bottom of the agenda when it came to reasons to hold a barbecue.

However, a side of veggies topped Brits’ lists of preferred accompaniments to their barbecued meals, ahead of morning goods, such as fresh bread rolls, and table sauces.