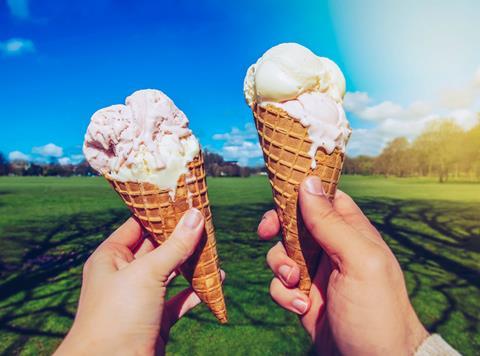 An extra 2.3% of households bought into ice cream in the supermarkets

Ice cream sales have soared in the mults as British shoppers enjoyed the UK’s longest heatwave for 42 years.

New shopper penetration was strong, with an extra 2.3% of households buying ice cream in the supermarkets, according to Jamie MacLeman, client manager at Kantar Worldpanel. “This growth has mainly been driven by multipacks of handheld ice creams, which have seen penetration up 4.1% on last year,” he said.

While 390,000 more younger shoppers engaged with the category, it was older consumers who entered in the greatest number, with an extra 460,000 over-45s putting ice cream products in their grocery basket. “This may be driving the sales growth of ice cream targeted at adults, which is up 48% on the same period in 2017,” said MacLeman.

Speakeasy co-founder Jane Woodhead hailed a possible ‘golden age’ of ice cream. “The quality is better than it has ever been, and brands are pushing the boundaries when it comes to unique flavours,” she said.

Innovation had definitely helped to drive growth, agreed Yee Kwan, founder of Yee Kwan Ice Cream. “Many people have sampled a new way of eating ice cream this year in a flavour they have never tried before.”

While the scorching weather was undoubtedly the catalyst of ice cream’s sales surge, its success was “absolutely sustainable” after the summer, claimed Charlie Thuillier, co-founder of Oppo. Lower-calorie brands were key, he said. “With the advent of healthy ice cream the category is bouncing back. Healthy ice cream is propping up the entire category.”