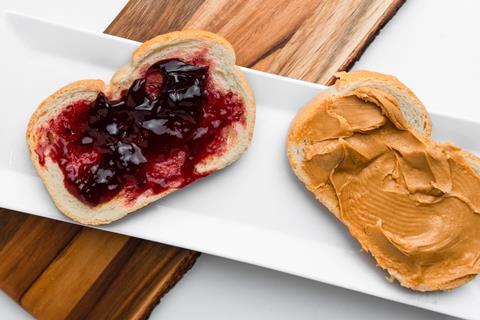 Sales of peanut butter have overtaken those of jam in the UK, IRI data has revealed.

Brands are putting this boost down to peanut butter’s versatility and health credentials.

Meridian Foods MD Paul Fraser said peanut butter had “come into its own” for lunches and snacking as well as with the recent rise in scratch cooking, noting its ability to make stir fries and curries “a bit more exciting”.

During lockdown, demand across the board has increased, with peanut butter gaining a 35.5% increase in sales over the 12 weeks to 25 April [IRI].

Pip & Nut founder Pip Murray said nearly half of its sales were attributed to kilo tubs, adding it had been “astonishing to see the shift” towards buying bigger packs.

He added it  had been hard to maintain supply with the trend towards bulk buying, as shoppers wanted to limit trips to the supermarket.

“Nut butters have been in growth for a while, and relatively gaining share in the breakfast spreads sector,” he said.