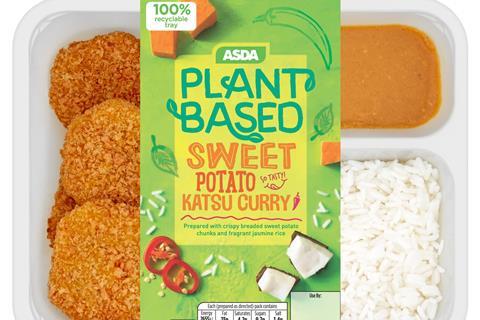 Asda has revealed that searches for the term “vegan” have rocketed to the top of its website in January, with the volume of traffic looking for vegan options on Asda.com up 417% on last year.

Asda said searches for vegan products on the retailer’s website beat milk, meat, eggs and fish to the number one spot, as shoppers snubbed these staples in favour of plant-based alternatives.

For the first four days of January 2020, the term “vegan” even ranked above everyday items such as bread and low-fat proteins such as chicken, it said.

Earlier this month the retailer launched 48 new products as part of its plant-based range to mark the start of Veganuary and said its most popular product in the range was a new vegan katsu curry.

“The popular product outperformed expectations, selling an impressive 92% more than planned in the first two weeks of the month, and leads the charge for more adventurous vegan-friendly alternatives to meat,” said an Asda spokeswoman.

“The new range is approved by the Vegan Society and features a range of meat substitutes, which in a first-to-market innovation, use mushroom-based alternatives to meat instead of soy-based alternatives favoured by most supermarkets.”