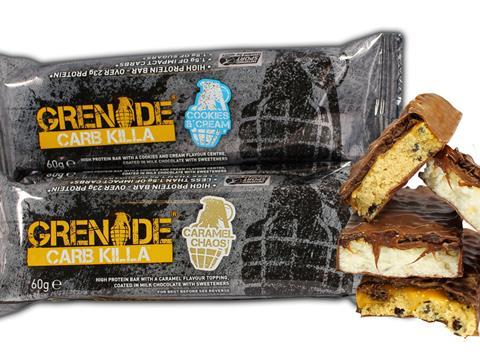 Sports nutrition snacks have racked up an extra £15.1m in sales as consumers swap chocolate bars for a protein hit.

An extra 10.6 million bars and flapjacks bought over the past year fuelled a £16.2m (13%) rise in the overall value of the sports nutrition market to £138m.

Brits are starting to see these products as a healthy snack, rather than a niche proposition for gym buffs, say suppliers. The change in perception has been driven by retailers positioning sports snacks in higher footfall areas alongside healthy snacks. Steve Rich, commercial & marketing director at Sci-MX, said retailers were “increasingly describing high-protein snacks as the future of confectionery”.

Grenade has seen its Carb Killa protein bar range account for 46% of all growth in the sports nutrition market [IRI 52 w/e 12 August 2018] - the result of it appealing to “more mainstream consumers who are looking for a healthier snacking option” according to Grenade chief marketing officer and co-founder Juliet Barratt.

Brands were consciously appealing to this wider audience, said Ben Lambert, director of brand design agency PB Creative. “We’re seeing a more ‘human’ and upbeat tone of voice, which connects with consumers on an emotional level to support them to lead a healthier lifestyle,” he added. “With the growing influence of social media fitness gurus, a healthy lifestyle is becoming a more commonplace goal.”

The growth in sports snacks coincided with a fall in sales of tablets and capsules, which have lost 24% and 45% of value respectively. However, their decline was more than outweighed by snacks’ rise.