We’ve had unicorn food, craft gin and chia seeds. Each new year brings its own trends; and January has prompted plenty of predictions on the next big thing for 2018. So leaving aside faddy restaurant creations, what will be the foods hitting the mainstream this year? These are our top three trends set to make waves in the supermarket aisles.

The Grocer was live on Facebook: Three food trends to hit retailers in 2018

See the full list of products mentioned in this video

It’s been hard to get through January without hearing some talk of vegan food. Veganuary is bigger than ever, driven by the rise in the number of UK vegans (estimated to be nearing the 550,000 mark, up 360% over the past 10 years). Supermarkets have sensed a growing opportunity. This month has heralded a plethora of vegan launches, from the Sainsbury’s “next-gen” plant-based range including dishes such as Sweet & Smokey BBQ Pulled Jackfruit (£3) to Tesco’s 20-strong Wicked Kitchen range featuring Caponata Sourdough Pizza and Gunpowder Potato Chana Masala (both £4). (And, more controversially, the £2.50 M&S Cauliflower Steak.) 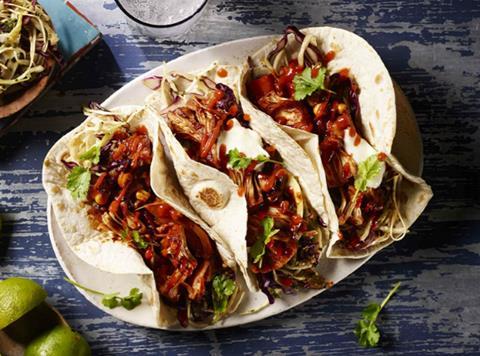 This looks set to be more than just a passing fad. Taking their lead from the US –arguably at the forefront of plant-based innovation – more and more UK suppliers are experimenting with vegan food. Plant-based burger Moving Mountains is launching into foodservice next month, aiming to do what the Impossible Burger has done on the other side of the Atlantic. Crucially, this isn’t just targeting vegans and vegetarians, but consumers who just simply want to reduce their meat intake (see also the rise of products that just contain less meat, such as Sainsbury’s Love Meat & Veg! range). Expect plenty more NPD along these lines.

2. Purple is the new unicorn

Unicorn food may have been fun, but consumers are now looking for the next Instagrammable food. And they want something more natural than bread dyed all the colours of the rainbow. Step in purple food. From watermelon radishes to purple potatoes and carrots, there are plenty of foods that can inject a bit of natural colour into dishes. That Ultra Violet is Pantone’s colour of the year for 2018 can only help the trend.

Purple carrots → purple soup. 💟 Send us all your low and slow dishes by tagging #f52simmer and we’ll share all of our faves. 🍲 (📸: @nutriliciously)

It’s true that purple potatoes tried (and largely failed) to have a moment a few years back. But the rise of Instagram since then and new ways of cooking – Instagram aficionados are keen on purple gnocchi rather than mash, which can all too easily turn a murky grey – means this attempt is likely to be more successful. Plus, many of these purple foods such as radishes and carrots don’t even need cooking, which taps into the rise of raw foods in Buddha bowls and the like.

The concept of gut health is nothing new. It was years ago that Yakult first tried to get us thinking about the ‘good bacteria’ in our digestive system. But today’s consumer is looking outside the probiotic yoghurt for different ways to boost their gut health; and fermented Asian foods are leading the way. Korean delicacies kombucha and kimchi have now officially entered the mainstream, with several listings on Ocado.

Kefir, which is thought to contain 30 strains of beneficial bacteria, is also becoming a fixture on supermarket shelves. The trend fits nicely with our national interest in more less familiar Asian cuisines such as Korean and Japanese, which have plenty of fermented foods to choose from.

Here are all the products we mentioned in the Facebook Live video: