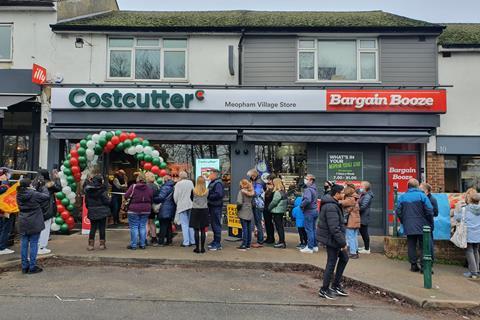 Bestway has fused together its Costcutter and Bargain Booze brands to create a new “store within a store” proposition.

Speaking at the ACS 2022 Summit this week, Bestway retail director Mike Hollis said it was leveraging its portfolio with the new store format, which sees its off-licence chain sited within a Costcutter store. The format was helping to offer shoppers “different store experiences” and the “best commercial returns” for its retailers.

He added: “Many of our retailers are using the revenue surge from Covid to reinvest back into their shops and making smart improvements that are playing an important role in converting those lifeline customers into lifelong customers.”

It has kicked off an initial trial with Costcutter retailer Peter Patel at his Meopham store in Kent, showcasing a 420 sq ft Bargain Booze section inside his 1,900 sq ft store. A second pilot is set to take place in May.

Despite a smaller than normal Bargain Booze store, Bestway said it had made “no compromise” on the range available. It explained if a store was smaller than 1,900 sq ft then it wouldn’t qualify for the format, meaning it can continue to provide “the full Bargain Booze offer”. This includes a wide range of beers, wines and spirits, as well as new products and alcohol-free options.

“The combination of ranges and services means that we can support customers across their different day shopping missions,” Hollis told The Grocer. “The store offers the modern shopper the ability to do a full shop in a convenience setting, close to home, and at a time that suits them.”

The business said it was considering a wider rollout of the concept across independents and had already received a high level of interest from retailers. It is also looking at potentially mobilising it across its company-owned stores.

While it is currently focusing on the proposition within Costcutter stores, it said it would be exploring the opportunity for Best-one retailers too.

“It’s incredibly exciting for a local convenience store to have an alcohol offer that challenges the multiples,” said Hollis. “The early indicators are that shopper missions are highly complementary if the offer is right and Bargain Booze has an unbeatable alcohol proposition – both in terms of value and choice – which shoppers are recognising.”