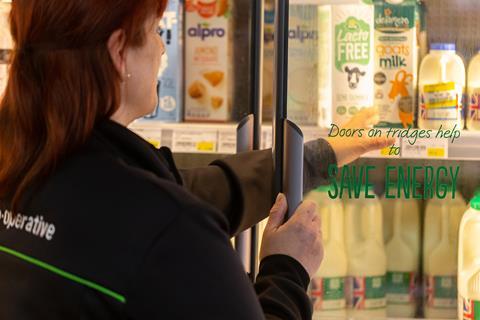 The Chelmsford Star Co-op has hit its target to reduce energy consumption by over 25% by 2021.

The Essex-based society set the goal five years ago.

It has been achieved through a combination of colleague engagement and investment in new technologies, it said.

This included the installation of LED lighting, refrigeration doors and voltage optimisation units.

“The key focus has been to reduce the consumption of electricity, which accounts for most of the society’s energy consumption,” said Chelmsford Star Co-op secretary & head of management services Ellen Tredwin.

Since January this year, the society began sourcing 100% of its electricity from renewable sources. These have been backed by the Renewable Energy Guarantees of Origin (REGO) scheme.

“We can track the power to five onshore wind projects that the Co-operative Group helped to develop, and Scottish Power’s Whitelee wind farm near Glasgow,” Tredwin added.

“By using renewable energy sources, we are committing to reducing our carbon emissions, air pollution and thus improving the beautiful county of Essex in which we live.”

The society also diverts 99% of produced waste away from landfill. This is assisted by its stores’ separate food bins that collect biodegradable waste, in a process known as ‘anaerobic digestion’.

Chelmsford Star head of food Joe Kerr added: “We are partnered with Olio, a mobile app for food-sharing, which facilitates connections with residents who can use surplus food. The redistribution of this food alone is worth £8,500 in the year.

“The society also works in partnership with the Salvation Army to provide clothes recycling services, which this year has assisted customers in recycling 29 tonnes of clothing.”

The society is looking to continue its efforts in reducing energy consumption going forward.