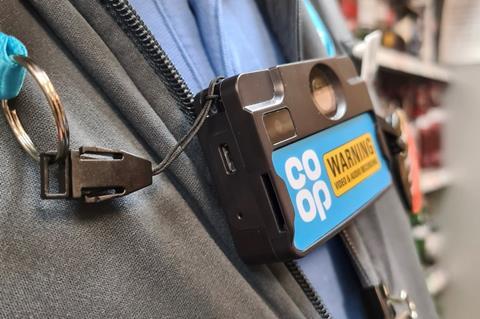 Co-op is supplying frontline store staff at 250 stores with body-worn cameras in response to a “crime and violence epidemic” in retail.

The cameras capture real-time audio and visual feeds, which are remotely monitored by Co-op’s security partner Mitie. Staff at the stores have been told to turn the cameras on if they believe an incident is about to happen, and to let the perpetrators know they are being filmed.

There are plans for a wider rollout of the cameras, The Grocer understands. Staff at some 600 stores will be equipped with safety devices, which can be pressed to alert Mitie to watch the store’s live CCTV feed.

Co-op says crime at its stores has increased by more than 140% year on year. The numbers of violent incidents on the shop floor has hit record levels, with 1,350 attacks suffered by Co-op shop workers in the first six months of the year.

“I have never seen such high levels of violence and abuse,” said Cheryl Houghton, Co-op retail security manager. “It’s a societal issue that all retailers are concerned about and it’s having lasting effects on the lives of shopworkers – both mentally and physically. It is not part of the job to be verbally abused, threatened or attacked and we’re determined to make sure it isn’t.”

The impact of such incidents on workers is significant. A Co-op-backed study by City, University of London last year found some staff that had experienced violence at work suffered long-lasting anxiety and post-traumatic stress disorder. Others sought to change their shift hours or location – or quit the job completely – to avoid the chance of encountering further violence.

In its 2020 Crime Report the Association of Convenience Stores found that a quarter of violent incidents resulted in injury, with a weapon used in almost a fifth of attacks. While knives were most commonly used, the use of axes, hammers and syringes had also been reported.

Co-op Food CEO Jo Whitfield said the issue was “just getting worse thanks to the onset of coronavirus”.

Store managers have reported being abused for asking customers to shop safely.

“A customer went ballistic at me when I asked him to respect social distancing measures – he started shouting verbal abuse, said he hoped I caught coronavirus and that he would ‘sort me out’,” said Adeel Zafar, Co-op store manager in Halesowen. Romford store manager Claire Saunders said “Recently a shoplifter threatened to spit in my face and give me coronavirus. This is not part of our job and it is just not acceptable.”

New rules requiring people to wear face coverings when in shops – which come into force on Friday – have prompted further fears about attacks on retail workers.

The cameras – similar to those trialled last year by Asda – are part of a £70m investment the retailer is making over the next three years into “innovative technology to keep colleagues safer”. Other initiatives include SmartWater Fog Cannons, which deploy a dense fog to obscure vision and douse criminals in an invisible liquid that can trace them back to the store; and communication headsets for all frontline colleagues.

The Co-op and shopworkers union Usdaw are backing MP Alex Norris’ Assault on Shop Workers Bill, which has had its second reading in Parliament postponed until September.

Earlier this month the government called for evidence on the issue.

“I will not tolerate violence and abuse against any shopworker and it’s right that those who commit these crimes must be caught and punished,” Home Secretary Priti Patel said at the time.

However, industry bodies are disappointed no changes to the law have been proposed.

Whitfield added: “Enough is enough – store workers need to know that the government is serious about tackling this issue and as an industry we must be united in protecting our workers.”