More than third of convenience retailers want to ditch cigarettes 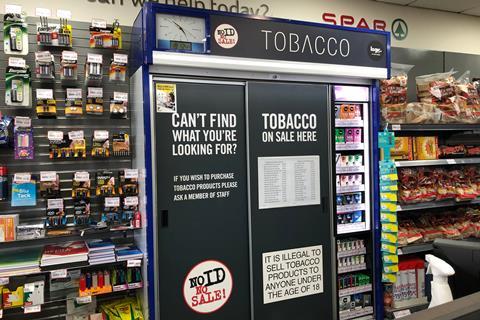 More than a third of UK convenience retailers want to stop selling cigarettes altogether, a survey by Philip Morris has revealed.

Some 35% of the close to 1,400 store owners questioned said they would like to become “an exclusively smoke-free retailer” and help their customers quit combustible cigarettes.

More than two thirds said they were keen to work with other local retailers to help smokers switch, and 58% said they would collaborate with pharmacies, GP surgeries, and smoking cessation services to the same end.

That’s despite combustible tobacco products – including cigarettes and rolling tobacco – making up 68% of annual smoking-related sales currently, versus 32% from smoke-free products such as vaping devices and heat-not-burn products.

The survey – which also interviewed 1,000 former adult smokers – also found a desire from consumers for convenience stores to play a bigger role in helping people quit. More than two thirds of former smokers said their local store “could have played a bigger part in helping them go smoke-free”. A similar proportion felt a convenience store was “an appropriate place to be advised about what smoke-free products might be right for them”.

However, just under a third (32%) felt their local convenience store was not equipped to advise them on smoke-free products.

“Rather than retaining customers as cigarette smokers, convenience retailers are building stronger connections over the countertop to improve awareness of, and access to, alternative products like e-cigarettes and heat-not-burn products,” he added.

The majority (91%) of convenience retailers sell smoke-free alternative products, most of which began stocking such products between 2015 and 2019.

“Convenience store retailers are embedded in their communities, with a reach unlike any other sector in the UK grocery market,” said ACS CEO James Lowman.

“This community grounding of convenience stores enables the people running and working in stores to be acutely in tune with the needs of their customers, but retailers also need to look at data from wider research to keep abreast of trends,” he added. “The e-cigarette and smoke-free category is changing fast, so it’s important to understand consumer attitudes and benchmark with your own experiences and sales information.”

Over the past decade, smoking rates have continued to decline. At last count, in 2020, the Office for National Statistics reported only 14.5% of people aged 16 years and over in Great Britain said they currently smoked.

The proportion of cigarette receipts, which comprise the largest percentage of tobacco receipts in the UK, has also decreased over the previous 10 financial years, though the figure rose 3.1% from 2021 to 2022 mainly due to a duty rate increase, according to HMRC.

Of the 1,397 symbol and independent convenience retailers surveyed by KAM and Lake Research, 59% considered the smoke-free category “to be the future of sales”. A similar proportion would completely replace combustible tobacco products if it meant increased revenue, and 53% would “if it meant they had a sustainable business for the future”.

However, this could take time. As Hetal Patel, owner of News Plus, Greenford said: “If I stop selling cigarettes, customers are not going to come into my shop because I don’t have them. Then I’m not going sell the other goods they would have picked up on the way in or out. That means my other sales are going to go down as well.”

Philip Morris said the shift to smoke-free “might feel daunting, and store owners may fear losing business” but argued that “the data makes clear that smoke-free is the future, so store owners must work towards that transition”.