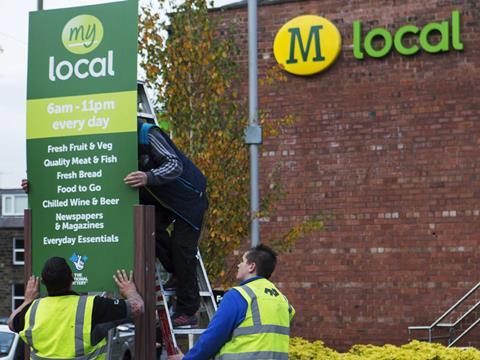 My Local CEO Mike Greene has praised the “Dunkirk spirit” of his staff for the way they have pulled together to overcome a difficult start to the new venture.

Only 16 of the planned 130 stores were able to open on Monday morning, after My Local took over ownership of the former M Local stores from Morrisons on Sunday evening and amid reports that the business had been had been left with very little to sell after Morrisons removed the remaining stock from shelves.

However, Greene told The Grocer the bigger issue had actually been getting all the Morrisons signage removed and adding the new My Local branding. “Legally we were not able to trade under the Morrisons fascia,” he explained.

Greene said all 130 stores would be open to business as of this morning (28 October), and he expected the issues involving stock to have been fully sorted by Friday. Greene added 60 stores had opened by lunchtime on Monday and 90 by Tuesday morning.

Greene, backed by private equity firm Greybull Capital, bought the stores for £25m early last month. He said the issue with exactly how much stock would be left in the stores was always one of the key uncertain elements of the deal as it depended on how much Morrisons actually sold, and then the two parties being able to agree on a price for the remaining stock.

In the end, no agreement could be reached and Morrisons pulled the remainder of products from the stores before the handover.

Greene said the new stores now had strong availability of fresh, food to go, tobacco, chilled and frozen lines and that more grocery and ambient lines were being added all the time.

“We will be at around 85% availability today and as close to 100% availability as you would expect from a good convenience store by the weekend,” said Greene.

He also said he was pleased the stores’ IT systems were all running smoothly.

Despite the difficult start, Greene said he was pleased to have opened the stores when he did, rather than waiting for them to be fully operational.

“Of course I can’t say that no one mentioned it, but most of our customers came in and had a laugh and a chat,” he said. “Most of them were glad to see it was still the same faces serving them and we were able to explain what we were doing. Even if it wasn’t perfect it still allowed us to start a conversation with our customers.”

“The staff have just been brilliant,” he added. “They have immediately moved across the My Local way of doing things and shown a real Dunkirk spirit in getting stuck in and doing all they can to get everything up and running.”