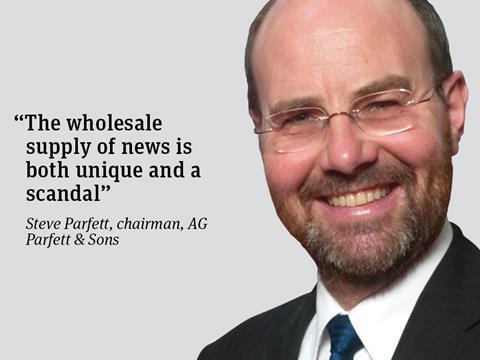 Most independent retailers make a very modest living serving their customers because they feel fulfilled doing so and can be their own boss. Almost all are unsung heroes but none more so than traditional newsagents.

I have written before about the multiplicity of tasks facing small retailers, but some of the most challenging are in CTNs. For obvious reasons the day inevitably starts before anyone else is around at 5am or before. It doesn’t normally end until 13 hours later, even for those who have not had to extend their hours to survive. Home delivery customers expect (and almost always get) their papers first thing. To offer home delivery, you need to embrace credit control with all its frustrations. If paper boys and girls don’t turn up you have to deputise. It could be argued that these frustrations go with the job.

What should not go with the job is being treated appallingly by your suppliers and the publishers that rely on you. I am reluctant to criticise other wholesalers, but the wholesale supply of news is both unique and a scandal. Everyone is occasionally dissatisfied with their treatment as a customer, but every week in the trade press are examples of appalling treatment - lateness, inefficiency, accounting errors. Newsagents are trapped in a monopoly supply situation and cannot change wholesaler. Every week the wholesalers either don’t comment when asked about their failures or mouth pathetic platitudes about speaking directly to the customer. To add insult to injury they impose a ‘carriage charge’, which rises relentlessly. Small wonder that there are newsagents having to moonlight as Uber drivers just to survive.

Meanwhile, publishers, whose very business has been built on the efforts of independent CTNs to act as a literal shop window for their product, cut percentage margins, bribe consumers to bypass the CTN with direct supply or decide to impose voucher systems for customers who will stay loyal that are costly to administer and where the vouchers sent for redemption not infrequently get lost. If anything, magazine publishers are worse for trying to convert customers to direct supply. Autocar this week is offering a subscription for the next 13 weeks at half cover price including postage.

As consumers demand more of what they want delivered directly at the time of their choosing, why is home delivery considered archaic and not valued as a means of protecting print media? Why can’t we achieve a competitive wholesale supply situation? Why can’t publishers react to the online threat by using their considerable investment in trying to steal customers to instead invest in making home delivery a great consumer option?