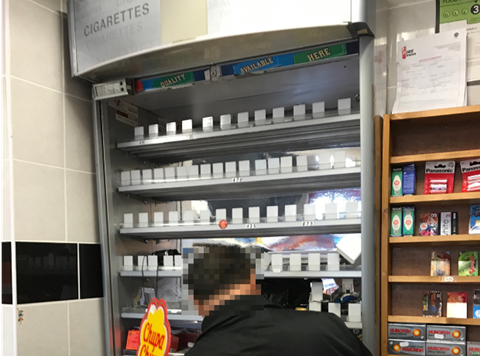 A convenience store in Coventry where illegal tobacco was ‘fed’ down a tube from a flat above has been sold following multiple raids.

Despite the raids, no one at the shop was ever convicted for selling illicit tobacco. But cigarette maker Imperial Tobacco terminated the shop’s membership following the discoveries.

The owner of the store, who did not work in the shop, has now been forced to sell the business.

Peter Nelson, Imperial Tobacco anti-illicit trade manager, said: “Babylon Halal has been involved in the persistent sale of illicit tobacco, and was therefore in breach of our strict ‘no tolerance’ policy. Imperial continues to work collaboratively with legitimate traders and law enforcement to fight illicit trade, and would like to extend our gratitude to Coventry Trading Standards for their sustained approach to illegal tobacco.”

Coventry is one of the busiest areas in the UK for selling illegal tobacco, according to Imperial, being the “central hub” of “illicit business offshoots”.

Up to three retail premises have closed in the last six months after Trading Standards officers found illegal tobacco at the sites.

“The phenomenal, enduring success of Coventry Trading Standards in the battle against illegal tobacco is an excellent example of longstanding best practice in the anti-illicit trade arena,” added Nelson.

“Imperial firmly believes that collaboration between all parties remains key to ridding local communities of this illicit menace.”