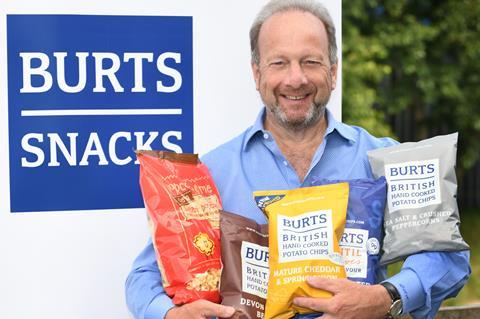 Burts Potato Chips has changed its name to Burts Snacks, as it targets sales of £100m by 2022.

The rebranding follows the independent supplier’s acquisition in December 2017 of popcorn maker Savoury & Sweet for an undisclosed sum – and would highlight its “commitment to becoming the UK’s leading producer of premium snacking products” it said.

Sales of Burts’ crisps alone shot up 20% last year from £31.2m to £37.4m, while the business expects its entire turnover to grow this year by 25% to £54.9m, with revenue in the first six months having reached £25m. This had been driven by sales in all market segments, particularly the better–for-you category, it said.

Burts’ ambitions have been bolstered by an investment of more than £7m across its Leicester and Roborough sites – including the installation of “a state-of-the-art frying hall” in Leicester, where 64 jobs have been created, and “pallet handling automation” in Roborough.

The developments came at “a time when other UK snack manufacturers are consolidating into larger, multinational portfolios” said Burts MD David Nairn.

“We’re bucking the trend by staying true to our core values by remaining independent and investing in our people, products and facilities to ensure we maintain our status as the leading specialist in premium brand and private label snacks.”