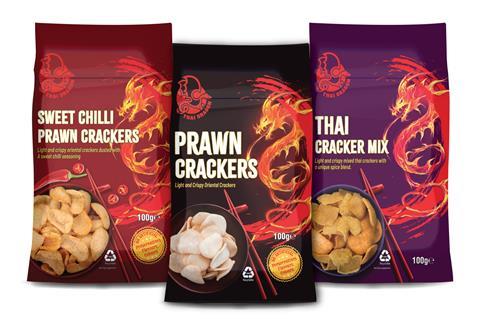 World foods producer Surya Foods has opened a new £2m bagged snack production facility – and made its first foray into the category with a duo of NPD.

Located at Surya Foods’ site in Harwich, Essex, the facility will be used to produce branded snacks for Surya Foods, as well as private-label products.

Its first NPD is a duo of Thai cracker packs, under a new brand called Thai Dragon. Two variants – Sweet Chilli Prawn Crackers and Thai Cracker Mix – roll out into Aldi this week in 100g packs.

Surya Foods said its existing frying and blending facilities meant it could offer “authentic regional flavours” to suit “all tastes and target customers”.

It already manufactures a variety of world foods, including Laila rice and Flying Goose sriracha.

It also recently expanded into plant-based foods with Laila Naturals, a 19-strong range including chickpeas, kidney beans, semolina, polenta and rice flour, which debuted in October 2019.