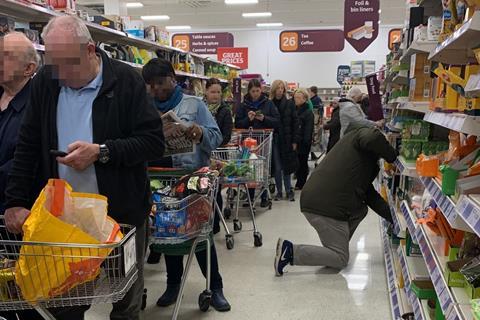 The criticism was justified on one level. “How much worse is it going to get?” asked journalist Harry Wallop, over a montage of people stripping aisles bare and queues round the block. Helpful.

But that was balanced by a healthy dose of calm from many of the contributors. See Wallop’s unsuccessful attempt to squeeze a scary quote from an egg producer who was dealing with a near doubling in demand from Tesco. Her answer? She had other farms on contract that could make up the shortfall, and there was much less demand from wholesale anyway.

It was a similar situation at a Bestway warehouse, when the presenter pointed out the lack of pasta sauces on shelves.

“This is a pinch point right now … we have some stock up there,” the manager replied. “We’re getting a delivery in.”

Tough times, certainly, but not the disaster Wallop seemed to be seeking. “There’s enough to meet demand, but only if we keep calm,” he concluded, completely devoid of self-awareness.