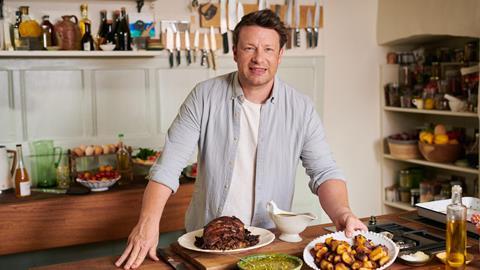 Together: mildly mawkish, but Jamie Oliver delivers as usual on the food front

As 2020’s first national lockdown heralded the crowning of fitness irritant Joe Wicks as ‘the nation’s PE teacher’, it’s easy to forget that his fellow mockney Jamie Oliver was offering lockdown cooking tips as early as 23 March, with his daily Keep Cooking and Carry On show, filmed on the fly and full of recipes with swappable ingredients, depending on what one could scavenge from depleted supermarket shelves.

There was less of an air of panic to his new programme, Together (Channel 4, 13 September, 8pm), with shelves seemingly less depleted at time of recording. A montage of hugs set a sentimental tone, as Jamie noted “people are finally coming back together”.

How better to do that than with food? Jamie promised “epic feasts” suitable for sharing – with a focus on early prep so cooks can spend more time with guests. The king of adjectives – who has also developed the irritating habit of describing a small amount of any ingredient as a “kiss” – promised “cheeky” mango cocktails, a “beautiful” starter of rainbow tomato crostini, an “epic” slow roasted lamb shoulder and “incredible” strawberry panna cottas.

True to his word, he started on the lamb the day before. The grisly task involved squeezing out merguez sausages to make stuffing, before the joint was mounted on a bed of bones. Complex stuff, though the crostini couldn’t have been much easier (and it got the seal of approval from guest Gennaro Contaldo, who reckoned “it’s-a summer on a plate”).

Jamie addressed food waste with a couple of useful tips, but this was all about family feasting, with frequent appearances from the Olivers’ cherubic offspring. The tone may have bordered on mawkish, but, as usual, Jamie delivered on the food front.