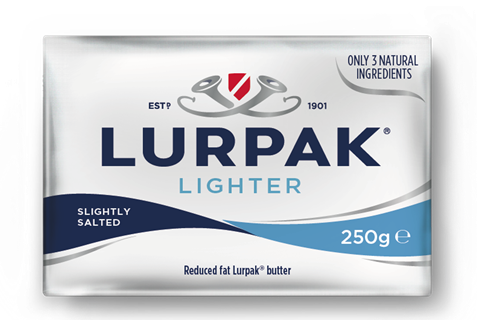 Arla has claimed a category-leading innovation after it extended its Lurpak Lighter range into block butter for the first time.

The dairy co-op said the butter contained 25% less fat than standard Lurpak’s 82g of fat per 100g. And unlike spreadable Lurpak Lighter variants, which contained rapeseed oil, the NPD was made with just three natural ingredients: butter, water and salt.

The butter will go on sale from April in a slightly salted 250g variant (rsp: £1.95) in Morrisons, Waitrose, Ocado and Amazon, followed by Sainsbury’s in May.

Arla said the butter had been in development over a number of years and came in response to consumer research that revealed light or reduced fat products were often perceived as unnatural and containing many ingredients.

It had managed to lower the fat content “through the development of a new production process”, the supplier added. It said it had created a product that “retains all the great taste and quality expected from Lurpak”.

“As the number one brand in the category, we want to tackle this and offer shoppers a new block butter product that is lower in fat and contains only three natural ingredients.”

The NPD follows the launch by Arla of the recyclable and reclosable Lurpak Butterbox in late 2019, which eliminates the mess associated with traditional foil.

Arla said Butterbox had delivered more than £3m in retail value sales since launch, a third of which had been incremental to the block butter sector.

The market-leading Lurpak brand saw sales climb by 11.9% to £382.4m last year, according to the Grocer Top Products Survey [Nielsen 52 w/e 5 September]. Its £40.7m increase in sales eclipsed the combined growth of the rest of the BSM category’s top nine brands.