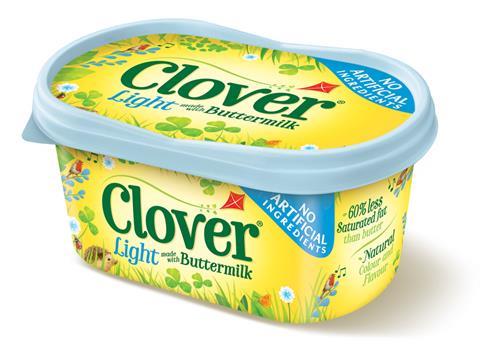 Dairy Crest will relaunch Clover Light next month with a reformulated recipe that contains no artificial ingredients.

The light spread’s reformulation follows the introduction of a new Clover Original spread which contained no artificial ingredients in September 2015.

The new Clover Light contained 40% buttermilk (up from 16% with the previous formulation) and 60% less saturated fat than butter. The reformulation was undertaken in response to the “enduring consumer trend towards more natural, unprocessed products and delivers a simpler recipe, made from fewer ingredients”, Dairy Crest said.

“The reduced fat spreads category is sizeable but has suffered from eroding interest over recent years as consumers are increasingly unwilling to compromise on taste and naturalness, which are key drivers of consumer choice within butters and spreads,” said Dairy Crest senior brand manager for spreads Emilie Grundy.

“To date there has been no light solution in the market (excluding dairy-free spreads) that has allowed them to cut down on fat without a compromise to the ingredient deck,” she added.

“Clover Light does just that, with a fantastic quality recipe and absolutely no artificial ingredients. To achieve this claim for a reduced fat spread carries huge technical complexity and is a real testament to the skill and dedication of our R&D experts.”

The new formulation came out on top amongst all light spreads in consumer testing, Grundy said. “We have strong expectations of the relaunch, which builds from the strong base of our Clover brand performance.”

In depth: The Midas touch: Butters and spreads category report 2018