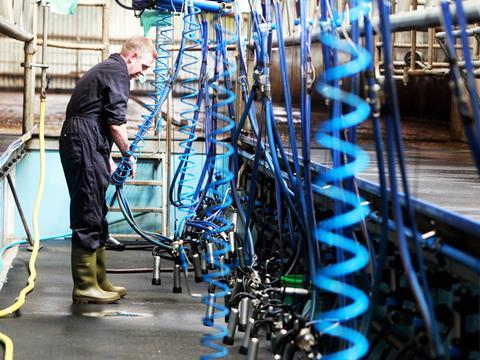 Dairy co-op First Milk has allayed fears over its debt after renegotiating its banking facilities, but has made further cuts to its farmgate milk price for January.

The processor, which endured a turbulent 2015 as it struggled with low dairy commodity prices and mounting cashflow and debt problems, said the refinancing with main creditors Lloyds and Barclays demonstrated “the progress we have made, not only in stabilising the finances of the business, but also in reshaping the company over the last 12 months”.

The expiry of First Milk’s existing banking facilities on 1 February, coupled with a precarious financial position and a board lacking the requisite business skills, were highlighted as potential risks to the co-op’s long-term viability in its annual report by auditors PWC last October.

The processor reported bank borrowings of £60.9m for the year to 31 March 2015, which were repayable on demand, and posted staggering pre-tax losses of almost £25m. It has since announced a return to the black for the six months to 30 September, with CEO Mike Gallacher’s turnaround plan for the business helping deliver a £1.1m operating profit.

But despite an improvement in its bottom line and a shake-up in its governance - with a new commercially focused board appointed and the announcement of a new chairman due in the next few weeks - First Milk has reduced its farmgate price for January by 0.25 pence per litre to farmers supplying the Campbeltown, Arran, Lake District and Haverfordwest creamery pools, and its Northern England balancing pool.

The price cuts follow a round of reductions for December, and reflected ongoing difficulties for the global dairy sector, said First Milk interim chairman Nigel Evans. “The market backdrop remains extremely tough, with sustained oversupply of milk, especially in the EU, driving up stock levels and putting downward pressure on prices,” he claimed.