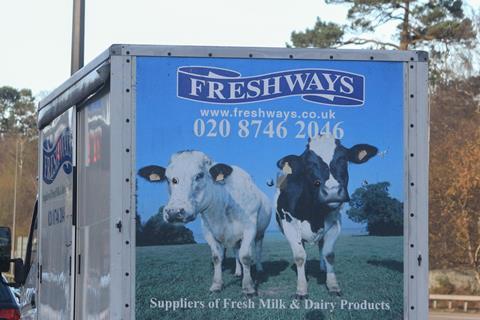 Mid-market milk supplier Freshways has warned of “operational challenges” from the coronavirus pandemic after reducing its farmgate milk price and extending its payment terms to dairy farmers.

With foodservice sales collapsing over the past two weeks, the processor said in a letter to customers it was incurring losses, and would have to decrease its farmgate price by 2p per litre from 29 March, while also extending payment terms to 45 days.

Retail partners could also expect a price hike, warned the letter, seen by The Grocer.

Some 40% of the London-headquartered business was dedicated to the foodservice and hospitality sectors, said MD Bali Nijjar. However, he warned sales to the channel had recently dropped by 60%.

“With the country entering into further lockdown, my concern is that this will go to zero potentially,” he added. As a result, the processor was having to sell milk originally destined for foodservice into the spot market, Nijjar pointed out.

It comes amid concerns in the sector that spot prices will fall significantly over the coming weeks as more milk from foodservice becomes available – potentially flooding the market.

And while sales into retail were offsetting some of the losses incurred by Freshways, Nijjar believed panic buying in the supermarkets would ultimately be “short-lived”.

The processor, which recorded a pre-tax loss of £2.6m in its most recent accounts, said it had spoken to the NFU to ask for pressure to be put on the government for support.

But with distribution costs also rising, it had to “be proactive”. This meant farmers would not receive payments for their milk until 15 May from the end of March.

“I appreciate the timescales proposed are in contradiction to the terms of our agreement, and one could argue that the events we are facing are ‘force majeure’ events,” Nijjar said.

“But these are exceptional times and we all have to work together to get through the next few months.”

Nijjar promised it would reverse the price cut element of the company’s actions if it could obtain government support, while also urging suppliers to “fully investigate what support they are entitled to directly”.

Nijjar had not responded to a request for comment from The Grocer at the time of publication.

The issues faced by Freshways pointed to wider difficulties set to be faced by liquid milk processors supplying into foodservice, suggested one dairy industry insider.

It follows a turbulent two years for the sector, which saw fellow mid-market processor Tomlinsons collapse into administration last October, while most of the UK’s major processors have been struggling through a profitability crisis.

Freshways has also been working increasingly closely with rival Medina in recent months, amid rumours of a potential merger. The Grocer reported in January the pair were undertaking contract packing for each other and “leveraging” their respective distribution networks.