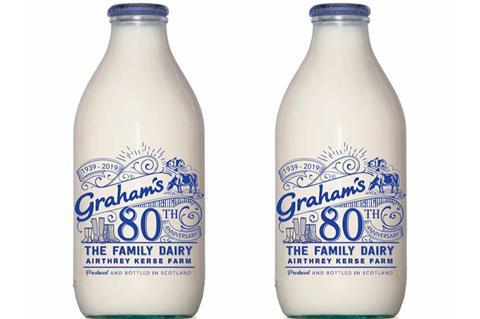 Scottish dairy brand Graham’s the Family Dairy has extended its DTC offering across the east of Scotland as more consumers resort to delivery services in the wake of coronavirus.

It has been extended south from the Highlands to Edinburgh, with the company saying it would prioritise the most vulnerable customers.

Demand has been high. MD Robert Graham said 7,000 people had enquired about the service since the move had been trailed on social media.

“The opportunity to get locally produced milk delivered direct to your door in glass bottles alongside a wide range of Graham’s products has had a strong interest,” said Graham.

“It will become a bigger part of the business. Working from home is going to become more commonplace than before and so people will be consuming more milk at home, instead of getting it in a coffee at lunchtime, say.”

Graham’s, which is retail-focused but also supplies more than 1,500 foodservice outlets with its milk, said the lockdown “has had a significant negative impact” on the business, despite an uptick of up to 250% for some of its retail products.

While the company is “getting on top” of issues such as milk balance, according to Graham, “very specific product demand” has forced it to temporarily close its Glenfield site in Cowdenbeath – which produces soft cheese and dairy ingredients.

One example of how coronavirus had affected production was butter. Graham’s has had to prioritise its ‘conventional’ butter over its organic variants, which has led to some of its products not appearing on shelves in Waitrose and Sainsbury’s.

He also stressed farmers were getting paid on time, including for the extra milk they were producing to meet demand peaks, but said the processor had had to pour away half a million litres of milk destined for butter and cream products last weekend due to prohibitive production costs.

However, Graham sounded a positive note, adding: “We’ve had these shocks in the milk industry before. What tends to happen, and I believe will happen at the back end of summer, is that milk will get tight and prices will rebound strongly.”