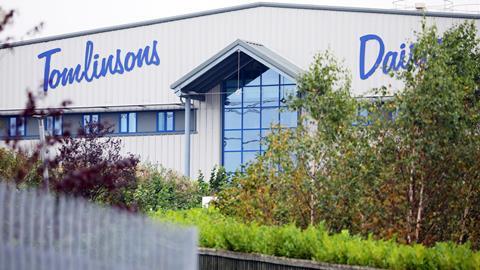 After a tortuous trading period, topped by Tomlinsons’ collapse, average margins are in the red. Can UK milk processing survive?

The collapse last week of Sainsbury’s supplier Tomlinsons Dairies raised some alarming questions about the prospects of the liquid milk sector. But it wasn’t exactly unexpected.

With processors, rather than dairy farmers, under threat, Müller called for a radical change in contract terms between suppliers and buyers. “If milk processing goes, it’s gone forever,” he warned.

Tomlinsons’ fate suggests there has been little improvement since. The collapse of the processor led to shortages of milk in some Sainsbury’s stores this week. And this could become a regular phenomenon without radical change, warns John Allen, managing partner of industry consultancy Kite.

So how bad is the crisis? And is there a way out?

Tomlinsons’ administrator PwC said the processor had experienced “significant cashflow pressures” over recent months, as it racked up operating losses of about £5m in the year to March 2018 and about £2m in the 12 months to March 2019.

Industry commentators have suggested low prices paid by milk buyers to processors have been a key driver in a crisis that has enveloped Tomlinsons - and the wider sector. And after a tortuous year of trading, wafer-thin processing margins have now edged into negative territory, The Grocer can reveal.

Average margins for the now six largest liquid milk processors (excluding Tomlinsons) have plummeted to -2.8%, according to our analysis of 2018 accounts lodged at Companies House.

Based on a combined turnover of £5.2bn, that equates to a cumulative loss across all six processors of a staggering £144.2m during the 2018 financial year - or an average loss of £12m every month.

“If this industry was an aircraft, it would be in a steep nosedive,” suggests one senior industry source. “Which is why the likes of Müller and Arla have been placing such a focus on intensive and aggressive turnaround measures.”

Unfortunately those measures included the closure of Müller’s 400 million-litre Foston plant as part of its Project Darwin cost-cutting programme in July. That - combined with the closure of Tomlinsons’ 200 million-litre capacity business - means the UK liquid milk sector is now operating at near full capacity, says Allen.

“That means there isn’t any room now for a breakdown. If there is any disruption there isn’t much scope for error. And if another processor were to close, we wouldn’t have enough capacity to process all the liquid milk in the UK.”

With four of the six largest processors reporting losses and the other two reporting minimal profits, further turbulence could be around the corner, says industry analyst Chris Walkland. “These losses are completely unsustainable, and we could be about to see more disruption,” he adds.

There are also signs farmers are looking to shift supply from liquid milk to more profitable cheese, with the likes of Saputo Dairy UK and Wyke Farms both investing in production.

“The more milk that migrates out of the liquid category, the more costly it will become to run these processing plants,” Walkland points out. “Losses will then accrue even further, so it’s a vicious circle, and that could ultimately lead to more shortages of milk in stores.”

Some processors may also decide not to work with particular retailers, he suggests, citing the rumoured onerous terms Tomlinsons and Medina were given when they secured contracts to supply milk to Sainsbury’s in 2016.

This chain of events could ultimately threaten the very future of British fresh milk in UK supermarkets - as Patrick Müller warned last year.

Müller tells The Grocer this week it is “up to customers, processors and farmers to work collaboratively to address the sector’s problems and make sure milk doesn’t disappear from supermarket shelves”.

With milk now “so cheap, nobody can afford to make it”, the only solution is for retailers to pay processors more for their milk and for the retail price of milk to increase, agrees Allen.

There have been moves in this direction. Securing a better deal for Müller’s milk has been a key pillar of the Project Darwin plan, hints Patrick Müller. “In an increasingly fragile sector, many customers are acting now to secure sustainable partnerships with us.”

And while it doesn’t comment on supplier relationships, Sainsbury’s is rumoured to have had to pay more for its new own-label milk contract, which is due to start next October.

The industry must end the era of milk as a loss-leader, says Allen. Increasing the price of a four-pinter from around £1.15 as it is now to around £1.40 should now be the ultimate goal of all retailers, he suggests.

“Consumers have been the main beneficiaries of low prices, but retailers will have to up their prices in order for the ­sector to survive,” he says.

It’s a stark choice, but if Brits won’t pay more for fresh milk, they may see it disappear from chillers altogether.