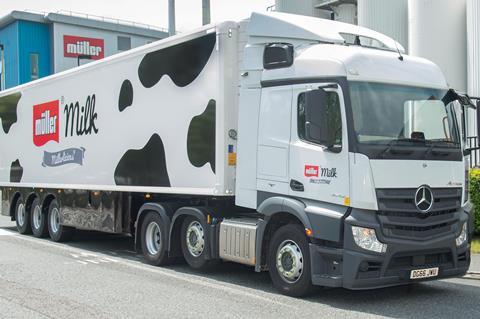 Müller Milk & Ingredients is to cut the amount of fresh milk and cream SKUs it manufactures by more than a third in a bid to cut distribution costs and reduce packaging and food waste.

The dairy giant’s SKU rationalisation programme, part of its Project Darwin cost-cutting drive, could see Müller pare down the 835 lines it manufactures at its network of six dairies by up to 40% over the coming months, The Grocer can reveal.

Müller is also in the process of rolling out a lightweighting programme for the SKUs that remain, following an ongoing investment in its milk packaging and bottle blowing capabilities. This will allow the business to remove 400 tonnes of plastic from its core fresh milk SKUs this year.

The simplification of Müller’s range will see a variety of less conventional lines and those that sell in small numbers delisted, with both own label and branded lines set to be axed.

It is also understood Müller has stepped back from bidding for some unsustainable supply contracts as part of its cost-cutting drive. And as The Grocer exclusively reported last week, Müller is understood to have also been lobbying larger customers such as Sainsbury’s to renegotiate terms, amid a crisis of profitability in the liquid milk processing sector.

At a typical Müller dairy, more than 90% of the milk sourced from its farmers was manufactured into less than 80 product formats, meeting customer requirements for different milk types, pack sizes and labelling, said Müller Milk & ingredients CEO Patrick Müller.

But at the same dairy, the remaining 10% of milk would be processed into a “staggering” 125 other SKU formats, he added.

“Typically this milk will be packed into smaller or unusual formats which tend to be far less efficient not only in terms of manufacturing, but through the whole supply chain.”

The environmental cost of persisting with some of these less common SKU’s was significant, Müller said, and required dairies to halt production while pack formats were changed for very small production runs.

“This causes unacceptably high levels of product waste, energy use and complexity throughout our business,” he added.

“We are working closely with our customers who are fully aligned with the need to simplify and improve environmental and business performance and we are extremely encouraged by the response we’ve had.”

Project Darwin – which aims to save £100m over the next two years - was launched in February, after Patrick Müller warned the way the business was currently run “doesn’t allow us to make a profit”. This followed warnings by the Swiss CEO last December that the wider liquid milk sector had reached a “tipping point” in terms of profitability.

Analysis of 2017 accounts by The Grocer revealed average margins had plummeted by almost 86% to just 0.14% across the UK’s seven largest liquid milk processors.

Read next: Sainsbury’s to bring forward milk supply tender to this year