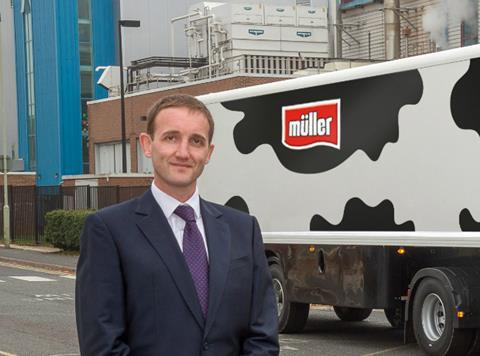 Müller Milk & Ingredients has announced plans for a £60m upgrade of its key processing sites, but it has proposed closing its Chadwell Heath dairy, with the potential loss of almost 400 jobs.

The dairy giant is planning to upgrade capabilities and operational facilities at its Severnside and Foston processing plants, with further enhancements to dairies at Droitwich, Manchester and Bridgwater. The project will create up to 180 new jobs across the five sites.

The proposals form part of a £100m-plus plan to modernise the Müller Milk & Ingredients and Müller Yogurt & Desserts businesses over the next 18 months as it seeks to improve “operational, innovation and marketing capabilities”.

However, it concluded that the Chadwell Heath dairy in North East London - acquired as part of its purchase of Dairy Crest’s liquid milk division - was “no longer economically viable”, said Müller Milk & Ingredients MD Andrew McInnes.

Müller is proposing a phased wind down of the Chadwell Heath dairy over an 18-month period with the potential loss of 389 permanent posts. MMI’s distribution network in the South East would be “unaffected by this proposal and would be maintained and developed to meet current and future customer requirements”, it said.

It plans to start a 45-day consultation with staff on 10 November.

“When we acquired Dairy Crest’s fresh milk dairy and distribution operations just under a year ago, we made it clear that change would be required to secure a better and more vibrant future for the dairy sector in Britain,” said McInnes. “We have taken time to assess the best way forward and to model and design a national processing and logistics network that fully meets the needs of our customers throughout the country now and in the future.”

By improving operational efficiencies at its Severnside, Foston, Droitwich, Manchester and Bridgwater sites, Müller would be able to unlock “innovation to transform the milk and ingredients sector, benefiting our consumers, customers, colleagues and farmers”.

But the Chadwell Heath site required complete overhaul and modernisation, he said. “And in an industry that has struggled for many years with excess and inefficient processing capacity, we cannot justify committing the level of investment that would be required to bring this site to an acceptable and sustainable level of performance.”