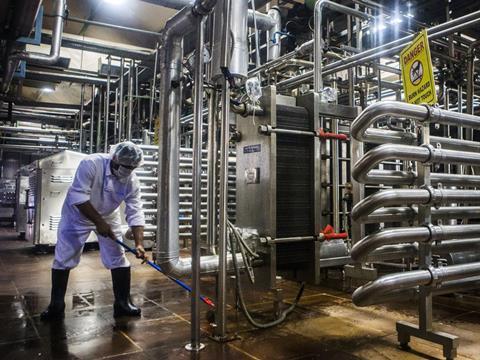 The fall in prices is a result of the ongoing Russian trade embargo, says Mintec analyst Emma Jayne Smith, with the subsequent loss of the Russian export market creating a “milk lake”.

“This extra supply led producers to turn towards converting milk into SMP as it has a longer shelf life and is easier to store than milk and cheese, and the sheer volume of milk being converted has continued to outweigh demand - causing low prices,” Smith adds.

As a further response to the increased supply of SMP, the European Commission re-opened Private Storage Aid in September 2014 and had more than 23,000t of SMP in stock by June, up 60% since May. The EU has also been forced to introduce an intervention programme which buys SMP from producers at a set price, with more than 20,000t purchased since 21 September.

However, there is some good news on the horizon, with the increased SMP supplies allowing European producers to exploit opportunities in developing markets, and this contributed to a year-on-year increase in EU exports to Asia by 30% during the first quarter of 2015.

It comes as Fonterra’s Global Dairy Trade price index fell for the first time since the start of August.

After four consecutive auctions delivered strong growth in the index - and hope that global dairy commodities were recovering - it slumped by 3.1% this week, with butter, Cheddar, SMP and whole milk powder falling by 11.1%, 2.2%, 4.5% and 4.6% respectively.

However, this week’s drop should not have come as a major surprise, given continued strong milk production in the EU and US in particular, says AHDB Dairy senior analyst Luke Crossman.

Milk production in New Zealand has now started to drop below last year (down 240m litres compared to September 2014), but the fall in production is more than offset by continued strong rises in the EU (up 370m litres year-on-year in August).

“Until major milk production regions react to price signals and reduce milk supply, the pressure on prices will remain,” he warns. “As a result, any recovery in prices is likely to be slow and subject to regular downward blips.”