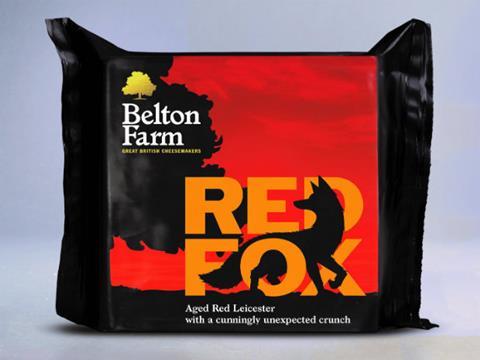 Cheesemaker Belton Farm has launched the next phase of its mission to reinvigorate territorial cheese with Tesco listings for its Red Fox and White Fox cheese brands.

Red Fox (rsp: £3/200g) will roll out across Tesco stores from next week, while vintage variants of Red Fox and White Fox are set to appear on deli counters in selected stores later in November (rsp: TBC).

The cheeses are based on aged Red and White Leicester recipes, and represented “a first branded play” for territorial cheeses in the mults in recent years, said a spokesman for Belton Farm. The brand hopes to replicate the model of craft beers, which have presented the category to a younger audience.

The move will be accompanied by marketing activity featuring the strapline ‘There’s more to cheese than cheddar’ in food titles, online, social media and in-store promotions. Customer sampling will also remain an important part of the brands’ marketing strategy, said Belton.

Since launching in the summer, Red Fox has secured listings in Waitrose and Booths, capitalising on increases of 3.8% and 2.4% in value and volume respectively for the territorial cheese category [Kantar 52 w/e 13 August 2017].

“The listing of Red Fox in Tesco comes at an exciting time for both the Fox brands and the territorial cheese sector of the category, which is showing growth,” said Belton MD Justin Beckett.

“Red Fox and White Fox are establishing a strong consumer fanbase with increasing rates of sale and repeat purchases. The brand is being delivered with an interactive marketing campaign, which is enabling us to engage with and encourage consumers to widen their repertoire beyond standard cheddar.”

The brand has also teamed up with TV chef Joe Hurd, who will feature the cheeses in his recipes.