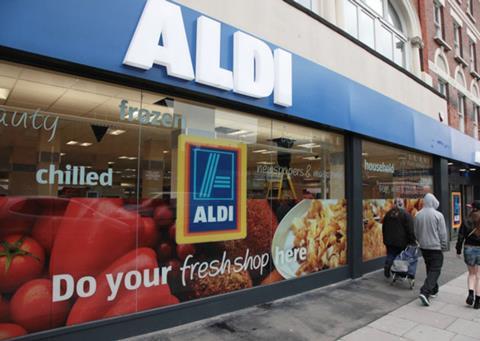 The growth of the discounters is set to plateau as their surge of new store openings cannibalises sales, according to a major report on the supermarket property sector.

The latest Colliers International/MSCI UK supermarket investment report, published today, claims Aldi is to be hit most in terms in market share, as its huge sales growth runs out of steam.

The report said the discounter was increasingly reliant on new store openings to increase share, but was being hit by increased costs and finding it harder to find new sites to expand its empire.

Colliers said there was evidence Aldi was coming towards the end of its dramatic sales growth.

Whereas new store openings only contributed around 27% to total sales growth in 2014, it said, the figure for 2016 (based on estimated 2016 total sales from Verdict Retail), had risen to a massive 83%,

If new store growth were stripped out, annual sales growth at Aldi for existing stores for 2015-2016 would fall to only 1.2%.

“The discount supermarket operators led by Aldi and Lidl have been major disruptors in the sector but there is now some evidence that their extraordinary growth curve is slowing.”

The report notes that Aldi and Lidl have plans to open another 60 to 70 stores a year over the next few years but it says the days of trading directly out of open pallets on the shop floor are coming to an end, with improved shop fittings inevitably eating into margins.

Although the report predicts problems ahead for the discounters, it is more optimistic about the performance of the supermarket property sector as a whole.

Despite the shockwaves from the EU referendum and the US election, it claimed the market was in better shape than a year ago even though the events muted property investment activity generally. Around £1.1bn of supermarket assets were traded in 2016 - a very similar level to the previous year.

Tesco had become a net buyer of stores as it continued to exercise buy-back options to mitigate its exposure to property costs, with the report estimating that the retailer spent around £450m on store acquisitions in the past 18 months.

Watson said: “Taking full control of these assets leaves Tesco free to ‘reboot’ the stores as they wish and align them with their ongoing strategy.”