GHM: discounter off to a flying start as new openings continue 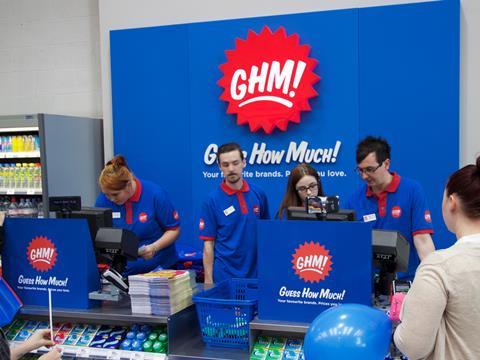 Fledgling discount retailer GHM said it had beaten its own sales expectations over the first couple of months of trading.

The retailer has opened four stores so far, having made its debut in Hinckley, Leicestershire, in June. GHM, which stands for Guess How Much, is also set to open its fifth outlet in Doncaster next month. The 8,800 sq ft store will be its biggest yet and GHM is also set to open in Cardiff shortly after that.

A spokesman told The Grocer that its stores in Sheffield and Sheppey were trading “considerably over expectations” while Hinckley was also ahead of its original target. It opened its fourth site in Walkden in Greater Manchester last week.

GHM is part of the Pepkor UK stable set up by former Asda CEO Andy Bond in 2014 as an offshoot from South African entrepreneur Christo Wiese’s retail group Pepkor, which is now part of the Steinhoff group.

Pepkor UK also owns the 50-strong discount clothing chain Pep & Co, and the GHM spokesman added that the inclusion of a full range of Pep & Co clothing “is proving to be a very good draw, even though it is a relatively new brand”.

“Overall, the GHM team is very pleased indeed with how things are going and the customer reaction,” he added. “It’s early days, but they seem to like it.”