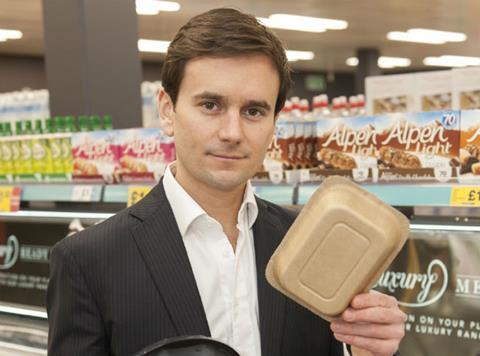 Richard Walker, managing director of Iceland’s The Food Warehouse, said the world has ’woken up to the scourge of plastics’

Frozen food specialist Iceland has vowed to become the world’s first major retailer to eliminate plastic packaging from all its own label products within five years.

The move, which the Iceland Foods and The Food Warehouse owner claims will prove to “timid” competitor food retailers the potential for radically reducing plastic packaging, comes as environmental group Greenpeace readies a petition - to go live tomorrow - calling on supermarkets to remove single-use plastic from their stores.

Iceland’s pledge will see it replace plastic packaging on around 1,400 own label products with paper-based alternatives. The retailer banned all plastic straws towards the end of last year, and is set to launch two new ready meal ranges on Thursday packaged in paper and pulp trays. These pulp-based trays will eventually replace plastic trays across Iceland’s own label range over the next five years, with plastic bags used for frozen vegetables and other foods set to be replaced by paper alternatives.

All trays and paper bags would be “fully recyclable” through domestic waste collection or in-store recycling facilities, Iceland said.

The group said its commitment would be an important step towards reducing the one million tonnes of plastic that Wrap says UK supermarkets generate each year.

Iceland said it would provide regular updates when it achieved key milestones during the next five years as it moved to plastic-free packaging.

Richard Walker, managing director of The Food Warehouse, who is driving the initiative, said he wanted to prove the potential for the entire supermarket sector to go plastic-free as far as possible.

He said the world had “woken up to the scourge of plastics” and the onus was on retailers to take a stand and deliver meaningful change.

“Other supermarkets, and the retail industry as a whole, should follow suit and offer similar commitments during 2018. This is a time for collaboration.

“There really is no excuse any more for excessive packaging that creates needless waste and damages our environment. The technologies and practicalities to create less environmentally harmful alternatives exist, and so Iceland is putting a stake in the ground.”

Greenpeace echoed Walker’s call for other retailers and food producers to do likewise.

“The tidal wave of plastic pollution will only start to recede when they turn off the tap,” said John Sauven, Greenpeace UK director.

“They know the scale of systemic change we need, and yet their responses have been timid and piecemeal. Iceland has offered a more radical solution that shows the way forward for the sector.”