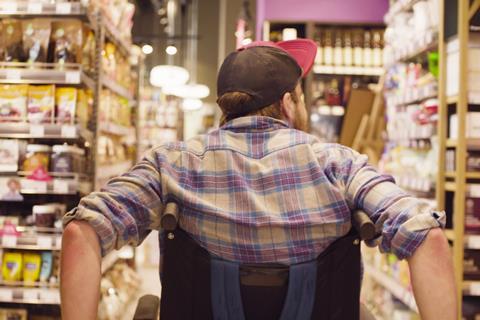 A class action against supermarkets is being readied by solicitors on behalf of more than 200 disabled people who say their needs are not being met during coronavirus.

The mults were failing to make “reasonable adjustments” so disabled people could shop in stores and online said Fry Law, the firm representing the 214 complainants.

Fry Law said it continued to receive a broad range of complaints about supermarkets who were failing to meet their responsibilities under the Equality Act.

Several visually impaired people and wheelchair users have claimed they are being refused help in stores and stopped from bringing a companion with them. People with other disabilities have said they are not being provided seating when queueing for long periods outside stores. When attempting to shop online, widely used screen-reading technology didn’t work on web pages where delivery slots can be selected, they said.

“This is for people who feel that they’re being ignored,” said Chris Fry of Fry Law. “They’ve sent complaints. They’ve not been able to get past customer services. They’re increasingly desperate.

“We had a plea from somebody who is disabled and has two disabled daughters. The only food they had left in the house was a tin of dogfood,” he added.

Sainsbury’s is the subject of more than 40% of complaints that had been brought to Fry Law, Tesco 30%, Asda 14% and Morrisons 8%. Complaints about Co-op, Iceland, Ocado and Waitrose have also been received.

A Sainsbury’s spokesman said its store workers “will always do what they can to support elderly and vulnerable customers when they shop in our stores” and that the company was “committed to serving the nation’s most vulnerable people”.

A Tesco spokeswoman said: “Everyone is welcome at Tesco, and we have measures in place to ensure that all our colleagues and customers with disabilities feel safe and at ease shopping with us. If any customer needs assistance when shopping then our colleagues are happy to help.”

Assistance such as reaching products or reading out label information could still be done at a safe two-metre distance, she added. If people needed to shop with a carer or companion they were welcome to do so.

Fry said some complaints have come about because of social distancing and other measures introduced by the supermarkets, while others like website accessibility had always existed but now being “put under the microscope and pressure tested”.

“Had this pandemic not taken hold, we may have found these issues taking some years to come to the fore,” Fry said.

In some cases, complainants had been told by supermarkets to use volunteer shopping cards so others could go to stores on their behalf.

“To say don’t worry you can just have somebody else do it, is really missing the point in a big way. From a moral and ethical perspective that’s not the right way to deal with it, and from a legal perspective it’s not a reasonable adjustment,” Fry said.

Formal letters of complaint will be sent to supermarkets on behalf of the 214, and if they are ignored or liability is not admitted, court proceedings “will have to be commenced”.

“Everybody has sympathy for supermarkets, responding under massive strain and great pressure. And nobodies suggesting these things are easy. But I don’t think these issues are insurmountable,” Fry said.

A survey of 842 disabled people earlier this month by the Research Institute for Disabled Consumers found many reported anxiety about visiting physical stores.

“Going shopping is giving me anxiety and fear of crowds as I can’t see. I feel particularly vulnerable when out and about…I don’t notice how other people are interacting with me or if they’re coming in close proximity,” one respondent said.

A large proportion were also struggling to get shopping online. Of the 47% of respondents who had used online shopping during the crisis, 45% believed the supermarkets were performing poorly or very poorly.

The RNIB said it had received an “enormous number of queries” from blind and partially sighted people who have been struggling to properly access supermarkets, and unable to find online shopping slots.