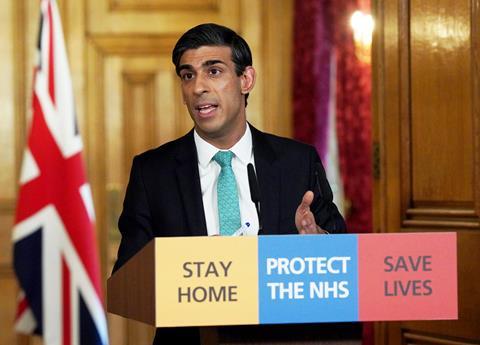 Chancellor Rishi Sunak and British Business Bank officials are reviewing access to state-backed loan schemes after the EU relaxed state aid rules that had previously blocked access to lifelines for some UK companies.

The Treasury is looking into making accessing coronavirus support loans easier for businesses, as the Chancellor vows to create “jobs, jobs, jobs” to boost the economic recovery following the hit from the crisis.

Last week, the European Commission relaxed state aid rules which had blocked access to loans for some UK firms.

Under the rules, the UK was forced to adopt “financial difficulty” tests, effectively blocking access to loans by businesses such as start-ups that were loss-making after investing heavily for growth.

A Treasury spokesman said they were reviewing the implications of the EU’s amendment and that this was “an important step in ensuring all viable businesses receive the help they need”.

The Treasury also added it was likely that UK firms rejected for emergency help under the EU’s financial difficulty tests could reapply once the schemes were amended.

So far, more than 1m firms have been lent £30bn under the Bounce Back Loan Scheme, which provided loans of up to £50,000 that are 100% backed by the government.

Townsend is due to step down from his position at Rentokil later this year and he previously held a finance director position at Mitchells & Butlers and, prior to that, various senior finance positions at Sainsbury’s.

Currently, he is also a non-exec at PZ Cussons and Galliford Try Holdings.

Meanwhile, independent non-executive director Belinda Richards will leave Morrisons’ board following the release of the interim results on 10 September.

Morrisons chairman Andrew Higginson said: “I would like to thank Belinda for her significant contribution to the board over the last five years, and to wish her well in her new role.

“I am delighted to welcome Jeremy to Morrisons. He brings extensive financial and industry experience and is ideally suited to chair the company’s audit committee.”

Townsend added he was “very much looking forward to joining Morrisons”.

Supermarket Income REIT has acquired a portfolio of six Waitrose supermarkets for £74.1m.

The transaction was completed as a sale nd leaseback between Waitrose and the real estate investment trust. The six stores continue to be let to Waitrose on new 20-year leases as they form a “key part” of its UK online grocery fulfilment network and offer home delivery and/or click and collect.

Waitrose will continue to trade from the stores as normal.

It looks to be a quiet week in the City when it comes to scheduled announcements from FMCG businesses, with the only notable UK event being Pets at Home AGM on Thursday.

In the US, Boots owner Walgreens Boots Alliance issues its third quarter results on Thursday.

In economic news, the Chancellor will make a further policy statement on coronavirus mitigation measures on Wednesday lunchtime.

The monthly Grocer Price Index will be published on Friday.