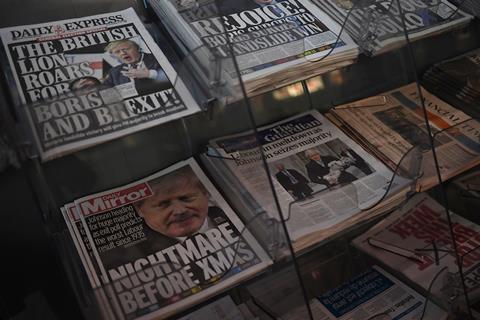 Analysts and City commentators on the implications of Boris Johnson’s landslide election victory and what the result means for consumer stocks and UK plc.

“A big majority for the Conservatives in the 2019 UK election should benefit our UK food retail coverage.

“Consumer confidence rarely makes a big difference but the protracted uncertainty around Brexit and the incessant media coverage was strong enough for consumers to reduce volumes in our view by 100bps to 150 bps. This is just in time for the most important food retail trading event: Christmas, where families traditionally trade up when they feel good. Surges in demand also lower food waste, further boosting margins.

“A stronger pound reduces the price of imports and inflation should come down or remain close to zero for the next six months. Contrary to common perception, this might be a positive as many UK households live paycheque to paycheque”

“The big Tory majority has given Boris Johnson much more room to manoeuvre without the ERG and Brexit Party breathing down his neck. This could all lead to a softer Brexit as it gives Boris the opportunity to lengthen the transition period beyond 2020 to negotiate a proper trade deal with the EU. This is probably the biggest impact as the rising tide should lift all UK boats. Investors will disproportionally look for the strong equity stories that have been overlooked during Brexit uncertainty.”

“The way Brexit gets done has huge implications for the UK economy. We expect the UK to formally leave the EU in the first few months of 2020. The challenge is trying to guess what long-term relationship the government pursues with its EU partners. We pin a 60% likelihood on Boris’s deal but still see a 20% chance of a soft Brexit. The risk of political brinkmanship means that a 20% chance of ‘no-deal’ remains. In any event, the status quo in terms of trade and regulatory alignment appears almost certain for 2020.

“For 2021 three scenarios are in play: a formal trade deal, an extension of the transition period or a no-deal outcome. The last option is unlikely given the risks but cannot be completely ruled out. An extension of the transition period would be logical, given the challenges of negotiating a trade deal in such a short period of time. This may be politically difficult to achieve, given the Conservative Party promise of a ‘clean’ Brexit.

“Which sectors benefit most? Utilities, banks, builders and retail dominate our buy list. Stocks on our buy list include Tesco, Sainsbury’s, Morrisons, Britvic and Greencore.”

“The Conservative majority win at the general election has driven a rally in the pound and UK domestic stocks.

“The fact that there also won’t be a hung parliament has given support to equities. The market now has more confidence that Johnson should be able to pass a Brexit deal and for the UK to formally leave the EU at the end of January 2020.

“The market is now digesting the prospect of a stronger UK economy as a result of the Conservative victory, which explains why shares in banks, housebuilders, leisure companies and retailers jumped following the general election news.

“There still remains much uncertainty with regards to Brexit and so today’s market fanfare may not necessarily be setting the tone for how all of 2020 will play out.

“Markets hate uncertainty and ultimately Brexit will become centre-stage again. Investors have been served a distraction in the form of the general election in recent weeks but the focus will now have to shift back to the structure of any trade deal and what could happen to the UK at the end of the 2020 transition period.

“Short-term the Conservatives have discussed increased spending which could give the economy a boost. Longer-term still remains uncertain and so markets are not going to keep opening bottles of champagne to toast a new dawn for the country.”

“The scale of the majority gives Boris and the Conservatives their clearest electoral mandate for over 30 years. There will undoubtedly be twists and turns in the Brexit process, but at least the direction of travel now looks clearer. We should also have a fiscal stimulus in the February Budget, a step up in investment and greater confidence from consumers and corporates. In this environment it would be sensible to be overweight UK domestics, which have traded at a discount to overseas peers since 2016.

“The UK food companies should benefit from stronger domestic demand as well as lower input costs from a stronger pound. The companies with the largest domestic exposure are Greencore (96%), Premier Foods (93%) and Bakkavor (12%). Premier has the most attractive valuation and also an equity most geared to recovery. There may even be better news in due course on the pension fund if the economy improves and interest rates move higher. Devro has the highest proportion of overseas sales (88%).”

“What a night! While the polls – and indeed the markets – were prepared for a Conservative win, it certainly wasn’t of this magnitude.

“The currency bounce will suppress the blue chip index, which has mostly overseas earnings, but improved sentiment will balance out that headwind.

“While there will be enticing currency and market moves over the next hours and days, it is still very early days for the new government. As ever, investors looking to play politics should be wary. Even the professionals get these kind of macro market calls wrong. Investors all over the world often have a portfolio bias towards their domestic market, so before you pile into UK stocks now there is more certainty around, first check your current geographical exposure. Lack of diversification can lead to greater problems down the road.”

“The pound has enjoyed its biggest surge in a decade on the hopes that a solid Conservative majority can finally end the Brexit deadlock.

“With more political certainty due to the large majority, the UK economy is also likely to receive an election bounce.

“Billions of pounds in business investment that has been on the sidelines due to the parliamentary paralysis is now ready to be unleashed. This will give a much-needed boost to the slowing British economy.

“It now looks more likely that Boris Johnson will indeed be able to ‘get Brexit done’.

“However, there’s still a long way to go. Mr Johnson’s self-imposed end of December 2020 deadline is a mammoth challenge, and a no-deal Brexit is still possible on 1 January 2021.

“The election result also puts a question mark over Scotland’s future in the United Kingdom. The SNP’s gains will embolden them in their key aim of securing Scottish independence.

“Mr Johnson’s monumental task to deliver Brexit with a deal and the Scotland issue will continue to fuel uncertainty in 2020.”

“Sterling and stability. For three-and-a-half years these words have seldom been seen together.

“Now finally they might. As the sleep-deprived incredulity of the morning after fades, the pound is drifting. But nevertheless it shows no sign of giving up the gains it made as last night’s momentous exit poll came in.

“Breathless talk of a Brave New World for sterling may be overblown, but two fundamental factors that had been holding down the pound have changed.

“Firstly the scale of the Conservatives’ victory means Boris Johnson’s withdrawal deal should sail through parliament, finally breaking the Brexit deadlock that has so tortured the markets.

“Equally the size of Mr Johnson’s majority will give him a freer hand in the nitty gritty of trade negotiations next year. He will no longer need to pander to Britain’s hardcore leavers – meaning the end result could potentially be a softer, more market-friendly Brexit.

“The threat of a chaotic ‘no-deal’ has not gone away but it has receded, and for now the pound is likely to cruise in a higher trading range than it has done for years.”