Is the market to blame for woes of Jamie Oliver & co?

We have passed peak Jamie. Two years ago his restaurant business was booming. But after closing a slew of Jamie’s Italians and the collapse into administration of his steakhouse, Barbecoa, the cloak of invincibility has fallen off his narrowed shoulders.

It’s not just Oliver, though. Profit warnings and site closures abound in the casual dining sector, with Prezzo, Strada and Byron also struggling amid soaring ingredient costs, falling consumer confidence and the strain of the new living wage.

So have Brits stopped eating out? And has the casual dining sector - such a source of growth and creativity in recent years - run out of ideas?

It’s a complex picture, Kantar Worldpanel data shows. On the one hand, out-of-home value sales were up 9% over the 12 weeks ending 25 February compared with the same period last year, with full-service restaurants (including casual dining establishments) increasing share of spend from 13.9% to 14.3%. That’s a year-on-year rise of 12% in value sales.

And the grocery trade is getting in on the act too: OOH sales in supermarkets are up 8% overall, with front-of-store OOH growing some 5%. Exclusive cafés are growing even faster. Similarly, moves in convenience to tap the food to go market are resulting in higher spend. 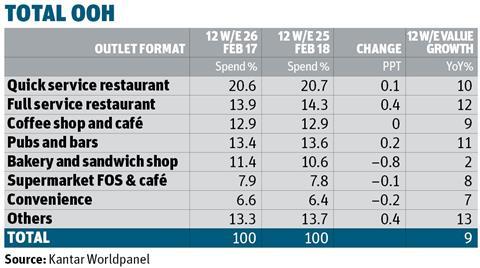 But much of that growth is coming from inflation. Frequency is up by 2%, which Kantar says accounts for only a fragment of value growth - the rest being inflation and premiumisation.

These conditions are causing havoc for establishments already struggling to maintain relevance, says James Lewis, marketing director for Soho restaurant Gauthier. As casual dining chains scale up (while piling on the debt) in several cases “there is nothing to make those businesses special anymore”.

The picture here has changed markedly in recent weeks. In 2017, Kantar figures show, the OOH market was growing at 4.3%. But over the 12 weeks to 25 February that 9% growth compares with 3.7% in take home (both excluding alcohol).

“What they did very well for many years was to give people value for money, but they have fallen a lap behind. The customer expects so much more now, and it’s near impossible for them to react to trends. They can’t just suddenly start changing a menu because of the logistics involved in rolling that out to 90 sites.”

Factor in increased competition and that consumers are “making their decision over a pound”, as prices rise, and it’s a recipe for disaster, he adds.

The casual dining trend is not going away, however, says MCA Allegra Foodservice executive director Simon Stenning, with spicy chicken chain Nando’s a clear winner. He credits its constant evolution as key.

“They have tweaked the menu, evolved the design of the restaurants, invested in technology and kept prices competitive. They’re constantly pushing the evolution of that brand, even though on a basic level they’re just selling chicken.” The likes of Yo Sushi, Pret and Wagamama are also proving resilient. Whereas Jamie’s, he adds, is “in essence the same brand it was in 2008”.

With high streets emptying of “cookie-cutter chains” CODE Hospitality editor Adam Hyman believes a shift in thinking from exigent landlords is needed. “Ironically, the chains that could afford the rent are now all closing. You will struggle to find independents who can pay.”

But that could be good news for the grocery trade, which has significantly upped spend in out-of-home options. The most high-profile success story has come from sushi counter openings, with Waitrose, Sainsbury’s and even Morrisons jumping on the raw fish bandwagon.

“With a drift towards online and the discounters, supermarkets are probably finding themselves with too much space on their hands,” says Kantar’s head of retail and consumer insight Fraser McKevitt. “They know this is the direction of travel and the size of the pie [a £50.5bn market] is getting bigger.”

A lot of moves by the major mults into OOH have failed spectacularly, however, most notably Tesco’s acquisitions of Harris & Hoole, Giraffe and Euphorium bakeries, so there’s also caution, with Sainsbury’s trialling Zizzi pizza counters, Waitrose and Morrisons opening in-store pubs and wine bars, while Waitrose’s £35-per-head supper club trial remains a one-off.

On the other hand, front-of-store fixtures, in particular, have become a hotbed of emerging trends - take Tesco’s recently launched vegan Wicked Kitchen range, for instance. There’s a clear financial incentive to investing in these fixtures: the substantial margins on pre-packed sandwiches, for example. “The other benefit they will have is that better out-of-home options drive footfall,” says McKevitt.

But growing out-of-home business comes with its own challenges. “They are subject to the same turmoil around wages and rates that hospitality businesses have to pay,” he says, though they “have scale on their side”.

And while the out of home market is currently growing in value, “there may be a sharp turnaround on OOH spending if we are to hit any more economically challenging times,” McKevitt adds. “And then we could see these share rises dramatically change direction.”