With the Conservative Party sweeping to power in the general election, key industry bodies and observers have been sharing their initial reactions and offering predictions and ambitions for the weeks and months ahead. Here are their thoughts on the key issues facing the food and drink industry such as Brexit, the economy, food and farming, and health. 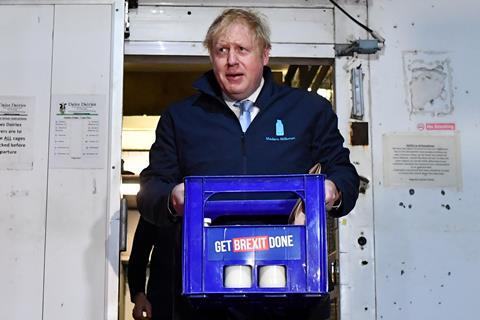 Johnson carrying a crate of milk to deliver to customers in Guiseley, Leeds, on the election campaign trail this week. Can he deliver for food and drink?

“We congratulate the prime minister and his government on the result of the general election 2019. For too long, business has been mired in a sea of political uncertainty, hitting investment, productivity and long-term growth.

“As the UK’s largest manufacturing sector, food and drink is part of the UK’s critical national infrastructure and essential to national security. The nation’s £31.1bn industry employs over 450,000 people, with a footprint in every community. UK food and drink is a national success story. As set out in our manifesto, we want to work in partnership with the government to reach our full potential as the most dynamic, sustainable, resilient and competitive industry, by boosting exports, developing talent and encouraging innovation.

”Food and drink from Great Britain and Northern Ireland is prized for its quality and provenance. Through a new national Food Strategy and a dedicated future trade policy for food and drink, we can ensure our industry flourishes and brings good jobs and growth to every corner of the UK.”

“We look forward to working with the new government on the many issues facing retailers. The prime minister must now fulfil his manifesto pledge and urgently begin a fundamental review into the broken business rates system to relieve the burden on retail businesses and create a system fit for the 21st century.

“Retailers employ three million people across the UK, making the industry the UK’s largest private sector employer. It is therefore important that the Apprenticeship Levy is made more flexible to enable the industry to use funds for any form of accredited training to suit its skills needs and create a workforce fit for the future. Equally, retailers need to see action from government to tackle retail violence. Every day, 115 people are attacked at work – no one should go to work in fear.

“It is also vital over the coming days and weeks that the government commits to bringing clarity on the UK’s future relationship with the EU and pursues a fair deal for consumers that maintains tariff-free, frictionless trade with the EU.

”With retail conditions the toughest they have been for a decade, the prime minister must act to support the successful reinvention of retail locations and local communities. We look forward to working with ministers on a strategy to strengthen the retail industry during this period of unprecedented change.”

In its election manifesto the FWD set out a number of clear policy priorities for the next administration. Now that there is a clear majority in parliament we look forward to working with the government to push for a comprehensive, frictionless trade deal after Brexit which keeps tariffs or trade barriers to a minimum.

We will be working to ensure the government maintains the current exemption for distributors around packaging, without which our members would see cost increases of up to 300% and we are also campaigning for a mandatory allergens database to guarantee consumers access to full and accurate information on the potentially harmful ingredients in the food they purchase. We look forward to working with the new administration on these priorities and actively championing the wide economic contribution of wholesale in parliament.

As a politically-neutral organisation we call on prime minister Boris Johnson and his government to put business first and push for a frictionless trade deal after Brexit with minimum tariffs or trade barriers.

Following a long period of political uncertainty, we want to see our members and the wider wholesale sector invest for the future and prioritise long-term growth. It is crucial that the government works with our industry – our members, many of them independent businesses, support other independent businesses, public services and provide a lifeline to remote and island areas.

We urge the government to provide a level playing field that allows our members to grow, supports local workforces and communities, and helps them work in partnership with customers and suppliers to create a healthy wholesale sector with a long-term future.

SWA asks the government to quickly review its manifesto pledge on introducing a deposit return scheme and implement it as part of a UK wide-scheme aligned with that of the Scottish government’s DRS proposals.

”With Boris Johnson and the Conservatives now having a working majority this will bring clarity on the UK leaving the EU. Whilst it will only be the start of a negotiated trade deal with the EU, in the short term it will remove the uncertainty around a no-deal Brexit.

”Our members can now get on with supplying customers without so much uncertainty that leaving without a deal would have brought. The next stage of negotiating the trade deal will be critical for our members and we hope that government will not only consult with us but also listen to real concerns that our members have that we need a good relationship with the EU.”

”We look forward to working with the new government to end the crippling uncertainty which has plagued UK businesses since the vote to leave the EU. It is key that we complete the ambitious Brexit timetable with a withdrawal agreement that supports UK businesses and eliminates any risk of a ‘no-deal’ scenario.

”We welcome the government’s pledge to back British business and this can start immediately by cutting wine and spirit tax. A cut to all hospitality business rates would also provide a welcome boost to the struggling high street.”

”Boris Johnson now has the numbers in the House of Commons to get Brexit done, but we need it done in a way which ensures business can operate effectively and which guarantees frictionless trade throughout the transition period.”

Cheema also said that while the impressive gains for the SNP would strengthen their hand in calling for a new vote on independence, there was no guarantee that the UK government would say yes to a second referendum. The Federation has also called very strongly for restraint in the Conservative plans for a NLW of over £10 an hour.

The NFU will start working with the new government and parliament straight away to ensure all areas of Westminster and Whitehall understand and value the importance of British food and farming.

In our own election manifesto, we raised a number of crucial issues we need the new government to address now, to ensure British food production has a sustainable and ambitious future.

Top of that list is Brexit. It’s imperative we secure a future trade deal with the EU that is as free and frictionless as possible, avoiding the damaging spectre of trading with our largest partner on WTO terms. Alongside this, our future trade policy mustn’t allow imports of food produced to standards that would be illegal to produce here.

The UK could embark on its first trade negotiations for decades in just 50 days’ time – the government must set up a Trade and Standards Commission as a matter of urgency so that they can work with industry and stakeholders to ensure those negotiations do not allow the high standards which are the hallmark of UK farming to be undermined by imported food which would fail to meet our own domestic regulations and values surrounding animal welfare, environmental standards and traceability.

Britain needs the new government to back British farming like never before; to invest in domestic food production so we can increase our productivity, create more jobs and deliver more for the environment.

Congratulations to the Conservative party on winning the election and creating a position where one party can now get on with the business of government.

Whatever their individual views on party politics or Brexit, I am sure that all in the growers in the British berry farming industry will join me in asking that the government now attends to our urgent needs around seasonal labour, delivers on their manifesto pledge to extend the 2020 seasonal workers visa scheme to the promised 10,000 at once and in time for the UK berry season this spring, and engages straight away on short and medium term plans to create and manage the availability of non UK seasonal workers. Also workers for more skilled jobs in horticulture where skills shortages in the UK exist post our leaving the EU and the end of the current temporary transition arrangements.

A big majority means Johnson may no longer be reliant on the DUP and ERG, so could he go with a softer Brexit? We just don’t know yet. And I suspect we won’t know his full intentions until after the expected January Brexit date.

From a food industry point of view, the Tory manifesto made some encouraging noises on supporting rural communities, shifting to new farming systems driven by public funds for public goods and continuing EU farm support payments.

The Tories have also made guarantees to increase the seasonal workers trial to 10,000 workers and commitments to British sourcing. So from an organic point of view, that’s good.

But we don’t know what will happen when it comes to protecting British food standards in trade negotiations, and we also need a commitment to agro-ecological farming techniques. We need to better understand the relationship between plants and soils – which has been underinvested for a long time.

The biggest priority is for the EU to recognise our organic standards, We are already compliant with EU regulations, so I would urge the PM to make gaining third country status for UK organic exports to the EU a priority. This is one no-tariff trade barrier that can be dealt with quickly, and it will give certain ty to organic producers and allow them to plan.